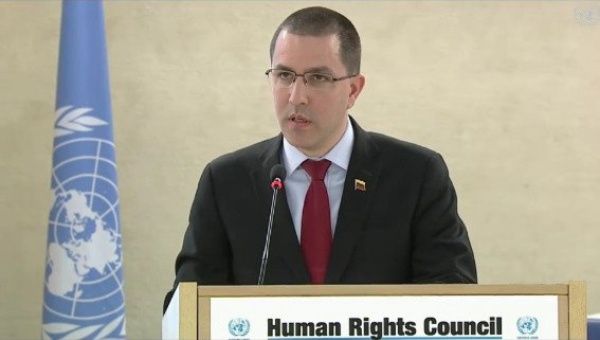 Arreaza said Simon Bolivar was right in 1829, when he said the U.S. wanted to “spread misery in the Americas in the name of freedom.”

Feb 26 (teleSUR) Venezuelan Foreign Minister Jorge Arreaza condemned the interventionist actions of the United States and its European allies in his country’s internal affairs Monday during his speech at the U.N. Human Rights Council in Geneva.

“For nearly two decades we’ve been harassed by interventionist foreign powers, eager to regain control of our oil, gas, gold, diamond, coltan, water and fertile lands,” said Arreaza before quoting Simon Bolivar when he said the United Stateswanted to “spread misery in Americas in the name of freedom.”

Arreaza said U.S. President Donald Trump has been threatening Venezuela all this time and imposed sanctions against the country in an attempt to topple President Nicolas Maduro and his government. “We can’t allow this Human Rights Council to be hijacked by those who only want to make war,” the Venezuelan top diplomat told high level officials during the meeting in Switzerland.

Arreaza pointed to U.S. State Secretary Rex Tillerson’s recent comments in which he openly suggested an overthrow of Venezuela’s democratic government and said he wouldn’t recognize the outcome of the next elections. Those are only some of the 105 international verbal attacks Venezuela has endured this year, the foreign minister added.

Maduro has called more than 400 times for the opposition to take part in a dialogue to bring peace to the country, but they have been unwilling to do so Arreaza stressed. The opposition also didn’t agree to participate in the elections on April 22, a date they themselves proposed.

He further condemned the U.S. Government for making the world believe there’s a humanitarian crisis in Venezuela with the intention of carrying out an intervention in the South American country, while highlighting recent comments by U.N. independent expert Alfred de Zayas.

The expert explained that although many think that the country is on the verge of disaster, as media outlets do, “Venezuela suffers an economic war, a financial blockade, suffers a high level of smuggling and, of course, needs international solidarity to solve these problems.”

Arreaza also pointed out that “the Venezuelan people have benefited from social plans such as salary increase and the pension system announced by the president.”

He added that “disabled people have been handed scholarships, unemployment has decreased to six percent, more than six million families have benefited by the Supply and Production Local Committee, and two million homes have been delivered.”

“Venezuela ratifies its commitment with the U.N. in defense of human rights because other countries have abused them and violated them,” Arreaza claimed. “Human rights must be sacred and we can’t allow them to be violated, because they’re crucial in the defense of our humanity.”

Ahead of his speech at the council the foreign minister held a meeting with U.N. Secretary General Antonio Guterres.