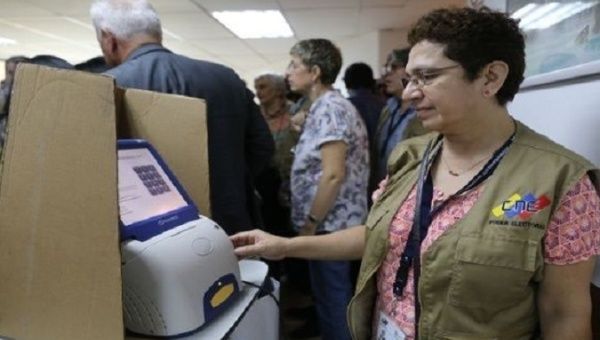 The National Electoral Board began delivering voting machines to polling stations to allow citizens to familiarize themselves with the new equipment. | Photo: AVN

The survey revealed that 71 percent, the great majority of Venezuelans, support the municipal elections.

Nov 20 (Telesur) A total of 59 percent of Venezuelans think the October regional elections and the upcoming municipal elections in December contribute to the general peace and stability in the country, a recent survey said.

A research project conducted by Hinterlaces from Nov. 1 to 15 among 1,580 Venezuelans revealed that the 71 percent, the great majority, support the municipal elections, while 77 percent of participants felt it was wrong for opposition parties to refuse to participate in elections.

Some 38 percent said they did not believe the December elections were not responsible for any increase in national peace.

The results were released during Sunday’s airing of Jose Vicente Hoy, a program hosted by Venezuelan journalist Jose Vicente Rangel.

In anticipation of the municipal elections, the National Electoral Board began delivering voting machines to polling stations to allow citizens to familiarize themselves with the new equipment.

The machines will be open to the public until Dec. 7, three days before the elections, and monitored by the CNE, which also distributed sample ballots on Nov. 19 so citizens could address questions prior to approaching the polling stations.

On Dec. 10, 335 mayors and a governor in Zulia will be elected to government positions.