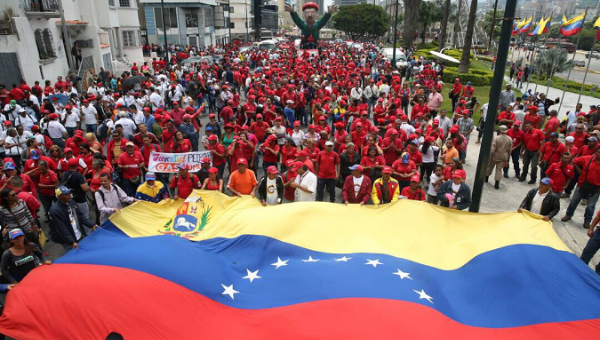 Large crowd gather in Caracas for an anti-imperialist mobilization against Trump threats and calls by the opposition for foreign intervention. | Photo: PDVSA

The mobilization intends to deliver a document to the ministry soliciting an investigation against Venezuelans who called for foreign intervention in the South American country.

On the 44th anniversary of the U.S.-backed coup in Chile, thousands have marched from Plaza Venezuela to the headquarters of the Public Ministry demanding respect for the country’s “sovereignty, independence, and self-determination.”

The mobilization delivered a document to the ministry soliciting an investigation against Venezuelans who called for foreign intervention in the South American country. The document also demands that those who called for intervention from an international sphere also be probed.

Jose Luque, a Caracas local who attended the march recalled that the failed coup against late President Hugo Chavez was an “attempt to repeat Chile’s history in Venezuela” and added that “the oligarchy did not count with the readiness of Chavez’s people who made it clear that day that Venezuela must be respected.”

On Saturday, the Vice President of Mobilizations and Events for the United Socialist Party of Venezuela Dario Vivas stated that he expects those found guilty of treason to be charged since it is stipulated by Venezuelan law.

U.S. President Donald Trump’s threats of military intervention and the government’s recent sanctions against Venezuela is an intensification of a long series of policies that have attacked Venezuela’s government since 1999 when Chavez was elected president.