Posted on December 7, 2017 by Anthony Brenner 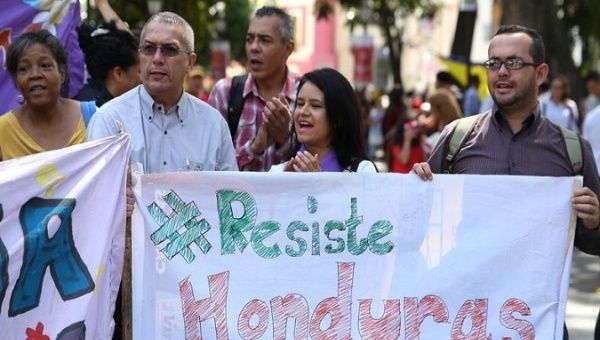 Demonstrators gathered on Tuesday at Plaza Bolivar in Caracas, Venezuela, to denounce the U.S. government’s silence over the situation in Honduras. | Photo: AVN

Hundreds of Venezuelans rallied in solidarity with the Honduran people Tuesday, gathering to voice their indignation at “electoral fraud” in the country and the international media’s ensuing silence.

Gathering in the capital of Caracas’ Plaza Bolivar, social movements called on Venezuelans to demonstrate their solidarity with Hondurans who are suffering from “true electoral fraud and a coup d’etat like that by the OAS (Organization of American States).”

Venezuelan diplomat Roy Chaderton has, in turn, advocated for an international solidarity movement to support the Honduran people.

“We need a big … movement of international solidarity with a country weakened by … imperialist … scoundrels, who try to stay in power at any price,” he declared, reported Prensa Latina.

He added that the country’s people must be supported to prevent another coup from occurring, referring to the one in 2009 that saw then-President Manuel Zelaya ousted in a right-wing, U.S.-backed military coup. The diplomat also expressed concern about the number of deaths that have occurred in the wake of repression of protesters, who have risen up in response to claims of election irregularities.

Chaderton also named the complicity of both the United States and the European Union in the political turmoil in Honduras.

“Part of the world wants democracy for Honduras,” he pressed. “I do not think the empire wants it and I have doubts that the European Union, which has become a kind of international fifth column, may have an interest in committing itself fully to a defense of democracy.”

The representative of the La Araña Feminist Movement, Daniela Hinojosa, also present at the march, said they would not allow Honduran people to “be oppressed by the oligarchies.”

She added that the group, and other Venezuelan social movements, are against the measures adopted by the government of President Juan Orlando Hernandez.

Tensions have been rising as presidential election counting is now in its eighth day without an official winner, with the Supreme Electoral Tribunal (TSE) accused of rigging votes in favor of incumbent President Hernandez, of the conservative National Party.

The Opposition Alliance (OA) is demanding electoral transparency, and that ballots from several thousand polls be counted under international observation, that it says were left out of TSE’s official results.

Though an official winner has not been declared, Hernandez is ahead with 42.98 percent, and OAS’ leader, Salvador Nasralla, has 41.38 percent of the popular vote with 99.98 percent of ballots counted.