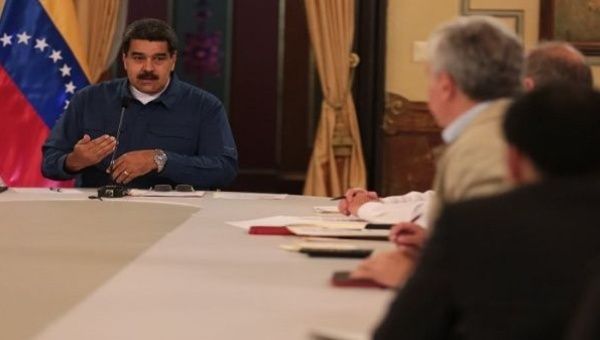 “The salary system and pricing will be anchored to Petro. Speculation is over!” said Maduro | Photo: teleSUR

“We are heading towards normalization, to a country of stability with the Recovery, Growth and Economic Prosperity plan,” said the Venezuelan President.

Venezuelan President Nicolas Maduro stated Monday in a press conference that the country will begin a new economic system of wages and prices rooted in the Petro currency.

“This means a substantial improvement and a better stability of incomes of workers,” he said, “while setting a maximum price of sale for the public, which ought to be respected.”

“All the institutions linked with the systems of distribution and price” will guarantee “its effectiveness,” explaining that as the prices will be rooted in the Petro, “there won’t be any excuse for speculation.”

“Venezuela will have two currencies, one being the Sovereign Bolivar, the other one the Petro. This will introduce a fundamental change,” he stated.

After a meeting with the ministers in the presidential palace, Maduro added that August 20 will become a new bank holiday in order to ease the transition to the new currency named “Sovereign Bolivar.”

According to Maduro, by 2020, “the nation will be able to recover economic and social stability and prosperity.” “We are building a new revolutionary and humanist economic thought, with a new strategic economy for a new economic model. On August 20, a new era will begin,” he added.