Posted on February 1, 2018 by Anthony Brenner 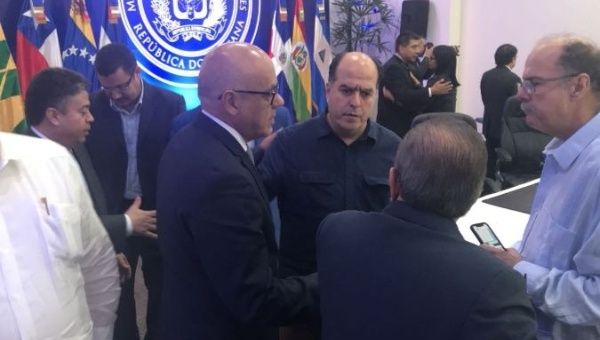 The two sides will reconvene on Monday in the Dominican Republic to sign an agreement, a government spokesperson said.

Jan 31 (teleSUR) The Venezuelan government and opposition groups have reached a ‘pre-agreement’ on a deal that could help resolve the issues facing the South American nation, Venezuela’s communications minister said Wednesday.

“The road to an agreement with the Venezuelan opposition has been very long,” said Venezuela’s Minister of Communications, Jorge Rodriguez, adding that the final agreement would be signed on Monday.

Rordiguez said the deal would allow the country to “dismount external and internal aggressions,” referring to sanctions as well as violent, opposition-led protests.

Also speaking at a press conference following the all-night talks, opposition representative Julio Borges acknowledged the progress in the dialogue but said there were issues that were not resolved.

“There is no agreement until everything is agreed upon,” said Borges, who stated the opposition delegation would return to Venezuela for “consultations.”

The two sides returned to the Dominican Republic to resume peace negotiations under the mediation of Dominican President Danilo Medina, former Spanish President Jose Luis Rodríguez Zapatero and international delegates from Chile, Bolivia, Nicaragua and San Vicente and the Grenadines.

Government and opposition representatives signed a document with details of the meeting, President Medina confirmed.

The dialogue has been based on a six-point agenda including the Sovereignty of Venezuela; an electoral timetable and electoral guarantees; peaceful coexistence and recognition of the National Constituent Assembly (ANC); economic guarantees; the opening of a “humanitarian channel”; and the release of the imprisoned.

Venezuela’s Attorney General of Venezuela, Tarek William Saab, recently announced measures to release 69 people arrested for their involvement in the protest violence promoted by the right-wing opposition in 2014 and 2017. In total, the ANC granted the benefit to 80 people as recommended by the Commission for Truth, Peace and Public Tranquility.

The Venezuelan justice department also granted the benefit of house arrest to the leaders of the Venezuelan opposition, Leopoldo Lopez and Antonio Ledezma, who were on trial for inciting acts of violence – incorporated in to the plan known as “La Salida” – aimed at overthrowing President Nicolas Maduro in 2015.

These round of talks come after two national elections where the governing United Socialist Party of Venezuela swept most of the positions.

Earlier this month, the ANC also called for presidential elections to be held before April 30.

The last round of talks in Sept. 2017 came five months after opposition incited riots left over 100 people – mostly bystanders – dead.

Some of the deaths, including the lynching of 21-year-old Orlando Jose Figuera who was reportedly burned alive for looking like a “Chavista,” shocked the country.