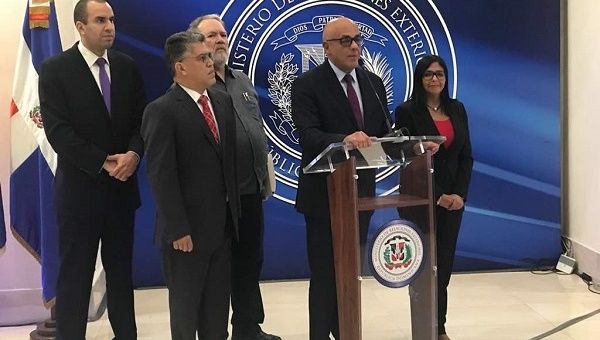 Dec 15 (teleSur) Dialogue between the Venezuelan government and opposition aimed at promoting peace and unity has made “great progress” and the talks are set to resume in the Dominican Republic on January 11 and 12, it has been announced.

President of the Dominican Republic Danilo Medina, who has been hosting the negotiations, held a press conference late Friday at the Convention Center of the Chancellery in Santo Domingo.

“There are six major issues that we are discussing,” Medina told the assembled international media. “Each issue has a number of subtopics. We must continue discussing some technicalities… We cannot announce the results until an agreement is reached on everything.”

Medina confirmed that on January 11 a working meeting will be held, and on January 12 the dialogue table will once again be installed in the presence of several international observers.

The talks concluding on Friday established that only two official spokesmen will be permitted to make declarations at the dialogue table: Venezuelan Vice-President Jorge Rodríguez and, on behalf of the opposition, Julio Borges.

Mexican Chancellor Luis Videgaray commented on the apparent weight of the negotiation process. “Both parties were extremely serious about the size of the challenge facing Venezuela,” he said.

Videgaray described advances in the dialogue progress as “partial and relevant,” but warned that no definitive agreement has so far been reached. “Both parties have agreed on time and methods to peacefully solve the problems,” he said.

Chilean Foreign Minister Heraldo Muñoz said: “There have been significant advances, although there is still technical work and a little more time is needed.” He also cited “hopes that next January 12 the agreement will be finalized and the process will be closed.”

“We have noticed a willingness to negotiate seriously,” Muñoz told reporters. “There is concrete work and we value it. It is not finished, but we are close to the goal and that is why we will be back in the Dominican Republic, so that the Venezuelans themselves reach a desired agreement and a peaceful exit.”

Venezuela’s government spokesman, Jorge Rodríguez, said the meeting was “a constructive event,” and stressed that the parties involved would reject any foreign interference in the process.

“We are happy that words and dialogue are being used to resolve the political issues in Venezuela, and we reject the U.S. communique that tries to boycott the dialogue process,” he said in response to a statement from the U.S. State Department threatening fresh sanctions against Venezuela.

“Politics must be the instrument with which we settle our issues; not weapons, economic wars or blockades. It must be with words.”

The initial December 1 and 2 negotiations between the Venezuelan government and the opposition were a watershed moment in the country’s recent political history. President Maduro had called for peace talks more than 300 times since he took office in 2013.

After the ruling United Socialist Party of Venezuela swept the municipal elections in October, the opposition finally agreed to negotiate.