Venezuelan Elections – Who is Nicolas Maduro? 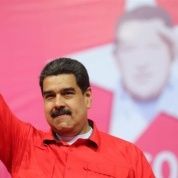 The only boy in the family, he had three siblings – Maria Teresa, Josefina and Anita – and his childhood was spent playing in the working-class, periphery neighborhood of Los Jardins, El Valle in Caracas.

Records show that Maduro didn’t complete high school. He went on to become a public city bus driver for the Caracas Metro company in the 1980s, where he worked for many years and cut his political teeth as a union leader representing fellow motorists.

In 1983, he served as Jose Vicente Rangel’s bodyguard during his unsuccessful presidential campaign.

Maduro moved to Cuba, along with other social activists in Latin America, to attend a one-year political education course at the Escuela Nacional de Cuadros Julio Antonio Mella in 1986.

His ties to late Venezuelan President Hugo Chavez date back to the early 1990s. Having joined the Revolutionary Bolivarian Movement-200 (MBR-200) around this time, he participated in the campaign to release Chavez, who was imprisoned for directing the failed 1992 military takeover of the Venezuelan government led by president Carlos Andres Perez.

The event was preceded by a slew of neo-liberal reforms, including privatization and austerity measures, as well as a debilitating economic recession, which culminated in the Caracazo protests. Government repression left a trail of bloodshed and death.

In 2006, during Chavez’s second administration, Maduro was named minister of foreign affairs. His tenure was marked by strategic gains such as forging, or strengthening, regional alliances with progressive governments in Brazil, Bolivia, Nicaragua, Cuba, Ecuador, Argentina and Uruguay, as well as the Caribbean Community (Caricom). Venezuela’s foreign policy was noted for its multipolar vision: a geopolitical perspective unconfined to the binary, Cold War powers represented by the United States and Russia.

Under Maduro’s leadership, the Organization of the Petroleum Exporting Countries (OPEC) was revitalized. Venezuela embarked on a period of regional solidarity, jointly establishing Petrocaribe, which allows Caribbean states to purchase Venezuelan oil at preferential rates, and even donated heating oil to poor residents in the South Bronx neighborhood of New York City in the United States.

Chavez appointed Maduro to vice-president of the country in 2012, after winning his third six-year term as president.

Two months later, Chavez announced he would be returning to Cuba for emergency surgery and medical treatment due to the resurgence of his cancer. If his condition worsened and new presidential elections were held, he encouraged supporters of the Bolivarian Revolutionary Government to cast their ballot for Maduro.

“My firm opinion, as clear as the full moon – irrevocable, absolute, total – is… that you elect Nicolas Maduro as president. I ask this of you from my heart. He is one of the young leaders with the greatest ability to continue if I cannot,” Chavez said in December 2012.

Officials loyal to Chavez said that if Chavez died, Maduro would be faced with more potent political instability.

Chavez passed away on March 5, 2013. Maduro was named Venezuela’s interim president and the United Socialist Party of Venezuela (PSUV) aligned behind him.

“Compatriots, I am not here out of personal ambition, out of vanity, or because my surname Maduro is a part of the rancid oligarchy of this country. I am not here because I represent financial groups, neither of the oligarchy nor U.S. imperialism… I am not here to protect mafias nor groups nor factions,” Maduro said during his brief ceremony where he officially assumed all powers and responsibilities of the president.

The Venezuelan Constitution stipulated that free elections had to be held within 30 days of Chavez’s death and, on April 14, 2013, Maduro was democratically elected president. His main rival, right-wing opposition candidate Henrique Capriles, lost the election by 1.5 percent of the votes.

During his first term as president, Maduro maintained political continuity with his predecessor. Now, just days before the May 20 general elections, Maduro continues to consolidate the Bolivarian Revolutionary Government through popular participation, which was evidenced just last year during the National Constituent Assembly (ANC) elections.

For his part, Maduro has consistently called for peace dialogue with government opponents. Prior to the ANC elections, opposition protests had killed more than 100 people, including Black Venezuelan Orlando Jose Figuera, who was burned alive on a public street for simply ‘being Chavista.’

Whereas mainstream media portrayed the ANC elections as a tool to convert Venezuela into a ‘dictatorship,’ Don Kovalik, a U.S. human rights and labor lawyer invited by the National Electoral Council to assist the ANC voting process, said the institution “opens the possibility for greater democracy.”

He said the 545 elected delegates “represent various sectors of the population,” including, but not limited to, Indigenous people, students, women, disabled people, workers and people of African descent.

And while the U.S. State Department deemed the ANC an “illegitimate product of a flawed process,” few were impressed by its peddling of a worn-out ‘democracy’ card having seated a president who garnered second place in the popular vote and was installed by an elitist electoral college.

Apart from his staunch defense of Venezuela’s right to self-determination and an egalitarian socioeconomic structure, Maduro has rubber-stamped his administration as being internationalist in its framework and execution.

Over the past few months, bearing the brunt of sanctions after sanctions handed down from the White, Western power axis – the United States, Switzerland, Canada, as well as the European Union – and its junior partners, Maduro has sought to consolidate support with member states of the Non-Aligned Movement, including but not limited to South Africa, Dominica, Iran and Cuba.

Also, identifying as a mixed-race person of Indigenous and African background, Maduro’s solidarity with African-descendents in the western hemisphere has become increasingly evident.

One of the few heads of state to commemorate the annual birthday and martyrdom of pan-African leaders, such as Malcolm X and Maurice Bishop, Maduro has lent support to the Caribbean Community’s (Caricom) ongoing reparations movement for slavery, colonization and crimes against humanity of African-descendent people.

Upon signing the UN’s International Decade for People of African Descent, Maduro commented that “very soon, at the latest in May, we will make a world meeting in Venezuela to establish a NAM (Non-Aligned Movement) team to advance a global plan for the reparation of the rights of African-descendant peoples… Historical reparation, recognition and justice is pending; that is our commitment.” That meeting is currently taking place in Caracas.

Maduro’s anti-imperial brew, including having launched the oil-backed Petro cryptocurrency on Feb. 20 to circumvent the “economic war” waged by the United States and its junior partners while advancing “on issues of monetary sovereignty,” has drawn the greatest degree of ire and military threats courtesy of the bellicose boys in Washington.

History is best qualified to determine the validity of such a threat. The United States has been at war 93 percent of the time – 222 out of 239 years – since it came into existence in 1776. Since the Venezuelan War of Independence, finally won in 1823, Venezuela has been at war for roughly eight years.

Maduro has taken the criticisms and attacks in stride, saying that “A whole new world is opening up for Venezuela thanks to Trump’s sanctions” and that he’s “honored that the head of the empire mentions me on a daily basis.” The backdrop to Venezuela’s May 20 elections couldn’t be more contentious, with incumbent President Nicolas Maduro leading the pack.