Venezuelan Economy ‘Will Recover in 2018’: Maduro 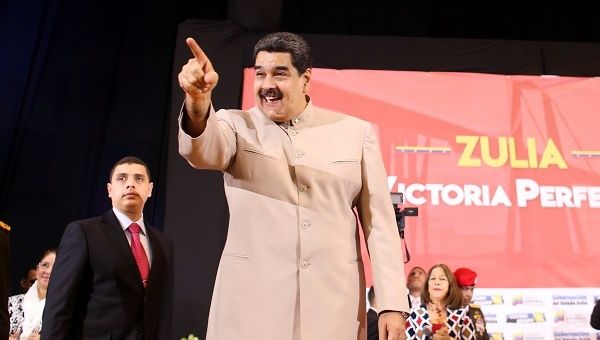 Maduro met with 335 mayors and 23 governors for the Strategic Planning Workshop of the Territorial Government System of the Federal Council of Government.

Dec 19 (teleSur) Venezuelan President Nicolas Maduro has held a planning workshop with the country’s mayors in a bid to ensure a path to “economic recovery” in 2018.

Maduro met with the 335 mayors elected December 10 to host the Strategic Planning Workshop of the Territorial Government System of the Federal Council of Government (CFG).

The agreed projects will be put into effect over the next four years as part of the Special Strategic Training Plan for the Territorial Political Entities 2018-2022.

The workshop, held at the Miraflores Palace in Caracas on Tuesday, was intended to define strategic objectives to ensure Venezuela’s economic recovery. The country’s 23 governors, elected on October 15, were also present.

“We have to take advantage of the energy, renewed strength and commitment of all of you so that we have an effort, common policies and an efficient investment of the physical, financial, material, political and institutional resources to address the key problems,” Maduro said.

“Venezuela is ending 2017 very well in terms of participation, freedom and democracy in our country. Venezuela is projecting 2018 as a year of comprehensive recovery: for the economy, social and political life, and of the democratic effort.”

The challenge should not be underestimated: mired in a severe economic crisis for the past five years, Venezuela’s GDP plummeted 9.5 percent in 2017, according to a report published last week by the Economic Commission for Latin America and the Caribbean (ECLAC). Data suggest, however, that rate will slow to 5.5 percent by the fourth quarter of next year.

The workshop comes just days after the Venezuelan government and opposition made fresh headway in talks to establish peace and unity between the two bodies.

Held in the Dominican Republic and due to resume on January 11, the ongoing dialogue represents a watershed moment in the country’s recent political history. President Maduro had called for peace talks more than 300 times since he took office in 2013.

After the ruling United Socialist Party of Venezuela swept the municipal elections in October, the opposition finally agreed to negotiate.