Venezuela Will Have Elections ‘With or Without Opposition’ 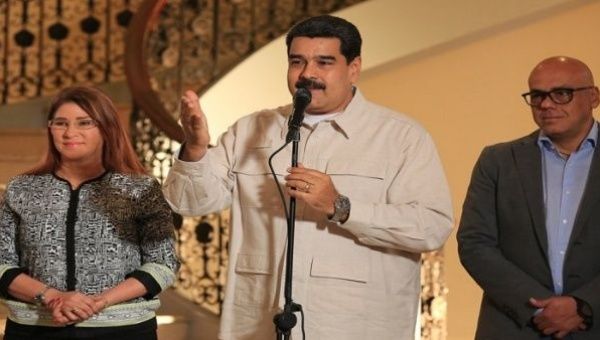 The president invited the international community to participate in the elections. | Photo: PresidencialVen

“In Venezuela there will be elections with MUD or without MUD,” said President Maduro during a meeting with the Fatherland For All party.

Feb 21 (teleSUR) Venezuelan President Nicolas Maduro said on Wednesday that the country will hold presidential elections on April 22 despite opposition sectors trying to obstruct the elections “because they know they are lost in the political map.”

Also, the president said that the elections would be held with or without the participation of Democratic Unity Roundtable (MUD), which on Wednesday announced that by consensus all the parties that make up the group will not participate in the presidential elections.

“In Venezuela there will be elections with MUD or without MUD,” President Maduro said at a press conference before local media, before heading a meeting with the Fatherland for All party (Patria Para Todos, PPT) at the National Theater in Caracas.

Also, the head of state indicated that foreigners who are interested in accompanying the elections are invited to participate to see in detail how Venezuelan democracy works.

President Maduro proposed advancing the legislative elections for April 22, as well as the members of the 23 Legislative Councils and the councilors for the Municipal Councils.

“A mega election, elections, democracy, participation and thus we have the complete picture: legitimate governors and legitimate mayors, new, legitimate National Assembly, legitimate councilors, legitimate regional legislators and a president of the Republic legitimized by the vote,” he explained.