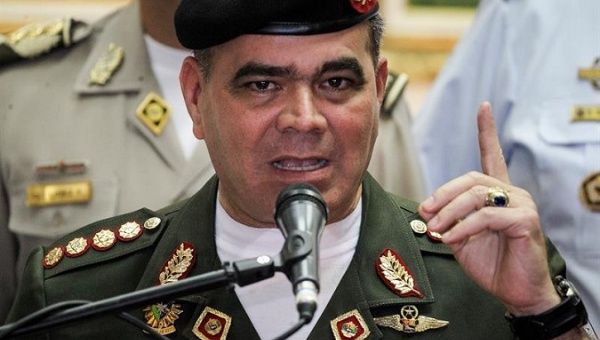 March 17 (teleSUR) Venezuela’s Minister of Defense Vladimir Padrino Lopez is warning new U.S. Secretary State Mike Pompeo to avoid repeating his predecessor’s mistakes: there will be no coup in Venezuela.

“If Mike Pompeo comes with the same policy that Tillerson initiated, with the same line of attack – of aggression – against sovereignty, against a population and its armed forces, he will again be faced with a wall,” Padrino said.

The announcement of Pompeo’s ascension to secretary of state was made by President Donald Trump on Twitter. Earlier this year, the director of the Central Intelligence Agency hinted that his department had contributed significantly to Trump’s decision to impose sanctions against Venezuela.

A former senior staffer on the House Foreign Affairs Committee, Thomas Hill, broke down Trump’s decision to appoint the former CIA director: “Pompeo is a pleaser – a Trump pleaser. The reason why Trump likes him is because he’s kind of a sycophant. He’s not going to come in and immediately stand up to Trump. It would be antithetical to the relationship that Pompeo has with Trump, right? The relationship is based on Pompeo saying yes.”

Based on past interviews, Pompeo is unlikely to change his position. Earlier this year, he said Venezuelan President Nicolas Maduro’s government posed a serious risk because of its links to Cuba, Russia and Iran.

Venezuela has repeatedly warned against plans for an invasion. Padrino said that despite attempts to overthrow the government by “puppets” of the United States, such plans will never succeed.

Despite the sanctions imposed by Washington, Venezuela’s economy has been rebounding thanks to the the recovery of oil prices, and Caracas remains hopeful that recent incorporation of cryptocurrency in the form of Petros, backed by oil exports, will allow it to circumvent the U.S. measures.

During the XXIII Ordinary Meeting of the Council of Ministers of the Association of Caribbean States (ACS) in Venezuela, Foreign Minister Jorge Arreaza called on the United States to cease hostilities against the Bolivarian nation: “Enough with the threats. We must avoid imposition and achieve multilateral forums in harmony,” he said.