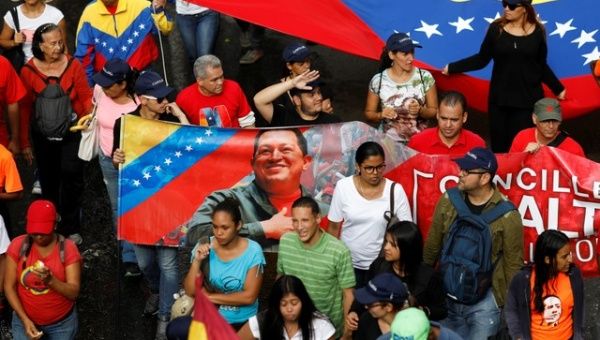 Venezuelans took to the streets of Caracas earlier this week in a show of support for the new economic reforms that took effect as part of the government’s Economic Recovery Plan. | Photo: Reuters

“We are going to achieve pharmaceutical sovereignty,” Maduro said.

August 26 (teleSUR) Venezuelan President Nicolas Maduro has asked for the price of medicines to be regulated as a part of the government’s recovery and economic prosperity plan.

“Set the maximum retail prices of all medicines in the country in accordance with the updated economic recovery plan,” he said during a meeting with health workers that was broadcast on television and radio.

Maduro then asked government ministers to coordinate a meeting “this week” with “all public and private businesspeople in the pharmaceutical sector for a plan… to make decisions on production, import, and prices.”

“We are going to achieve pharmaceutical sovereignty and security, and we must stabilize, normalize (and) improve,” how we operate the head of state stressed.

The price-fixing measure was publicized earlier in the day by the Minister of Communication, Jorge Rodriguez. He said that the government was already holding meetings with members of the pharmaceutical sector, and others, “to achieve a price agreement that… maintains the need for (a price) balance.”

Maduro also noted that he has “taken precautionary” measures to deal with the shortage of drugs in the country and assured that “imports for medicines are guaranteed for the rest of the year and part of the beginning of next year.”

“We have imported enough medicines to care for our people,” he said after denouncing economic sanctions imposed on the country by the United States and European Union. He said the sanctions have “kidnapped USD$1.4 billion” from the Venezuelan economy.

Maduro also asked government officials to present a proposal to “centralize the payroll of the entire health sector” to establish “a unified salary table.”

Venezuelans took to the streets of Caracas earlier this week in a show of support for the new economic reforms that took effect as part of the government’s Economic Recovery Plan. The measures seek to fight back against the economic war and sanctions targeting Venezuela by the U.S., European Union, and their regional right-wing allies and address the subsequent financial struggles facing the country.

The recently introduced “Sovereign Bolívar” currency began circulation on August 20 as one of the first measures in Venezuela’s Economic Recovery Plan. The currency is pegged to the country’s cryptocurrency, the Petro, which is worth 3,600 sovereign bolivares.