Venezuela Slams ‘Ego-Driven’ US Attacks on Peace and Stability 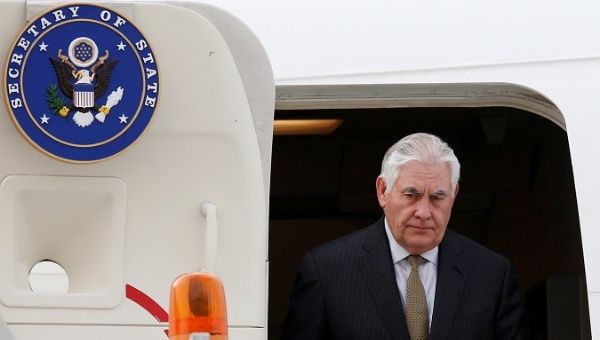 U.S. Secretary of State Rex Tillerson steps off his plane as he arrives at the presidential hangar in Mexico City, Mexico, Feb. 1, 2018. | Photo: Reuters

A statement by the foreign ministry said the Venezuelan people will not yield to the pressure by applied by the U.S. and its right-wing allies.

Feb 25 (teleSUR) The Venezuelan government accused Saturday the United States of “attacking the peace and stability” of the South American country “by trying to judge” the process of presidential elections on April 22.

“As usual, the U.S. regime, in turn, intends to assume an extraterritorial authority to define the future of peoples without it having been granted [the authority] by anyone, with the sole purpose of justifying their interventionist policies that have caused so much damage to humanity,” the Venezuelan Foreign Ministry said in a statement.

The statement came after Washington expressed support to the opposition parties that have decided to “reject the terms and conditions” of the April presidential elections and not participate in the them.

Such statements show the U.S.’s “eagerness to achieve what its internal subordinates have not obtained with popular support through elections,” as well as Washington’s intention to “question the right of citizens for a free, democratic and sovereign country and to decide their future without interference of any kind and in a peaceful way,” said the statement issued by Venezuelan Foreign Minister Jorge Arreaza.

The statement stressed how the upcoming elections will be decided with the same transparency and democratic processes as has been the case over the past two decades since 1998 “where it has had the support of international experts and national observers.”

Therefore, Arreaza further assured, such attempts by the United States government will not deter the Venezuelan people from carrying out their right to vote nor will they “let peace be snatched” in order to “to satisfy the ego of U.S. officials or their regional or local subordinates” who he accused of being responsible for “political violence and attacks” in the South American country.

The U.S. administration of Donald Trump has been ramping up its interventionist rhetoric and policies against the socialist government of Venezuela, with Secretary of State Rex Tillerson suggesting earlier this month that President Nicolas Maduro would be removed from office by a military coup.

In his recent tour in Latin America Tillerson also lobbied right-wing government to put diplomatic and economic pressure on Venezuela, leading some countries to reject the country’s upcoming elections, while also attempting to exclude Venezuela from the major Summit of the Americas in Peru in April, a move led by the so-called Lima group.

The Venezuelan government has also accused Washington and its top diplomat of sabotaging last month’s talks between the government and opposition parties in the Dominican Republic after the right-wing leaders refused to sign the final draft of the agreement following a phone call by Colombian President Juan Santos to the opposition delegation upon Tillerson’s request.