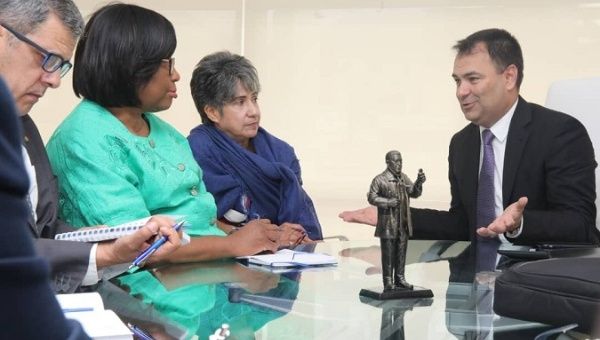 June 14 (teleSUR) The Venezuelan government has reached an agreement with the Pan American Health Organization (PAHO) to guarantee the supply of medicine and medical equipment to the South American country.

On Wednesday, Venezuela’s Health Minister Luis Lopez announced via Twitter “we have established agreements with PAHO to boost our supply of medicine and guarantee the provision of supplies for primary health.” Lopez also said they had agreed to strengthen epidemiological surveillance in the country.

The announcement comes after a meeting between PAHO’s director Dr. Carissa Etienne and health authorities in which they evaluated the current state of the country’s health system.

“We learned a lot about Venezuela’s health system and primary health services… We have to do some things, like eliminate the transmission of measles and diphtheria, and improve access to high-cost medicine and the number of human resources in hospitals,” Etienne said during an interview with VTV.

Since the first cases of diphtheria and measles in 2016 and 2017, PAHO has strengthened technical cooperation, supporting the health ministry by providing vaccines, training vaccination professionals and analyzing the new cases.

Between 2017 and 2018, PAHO has provided the country 7 million doses of MMR (measles, mumps, and rubella) and MR (measles and rubella) vaccines, 9 million DPT and DT vaccines, that protect against diphtheria, tetanus, and whooping cough.

Etienne said the organization is committed to the people of Venezuela and will work with the government, who have repeatedly stated their interest in improving the efficiency of the country’s health services.

On Monday, the health minister announced they would work on an agreement with PAHO to confront the “international financial blockade” that he explains has caused scarcity.

During her visit to the country, Etienne will also meet representatives from other United Nations agencies, and civil society organizations to strengthen ties and ensure the provision and promotion of health care.