Venezuela Reprimands the US Charge d’Affaires For Interference 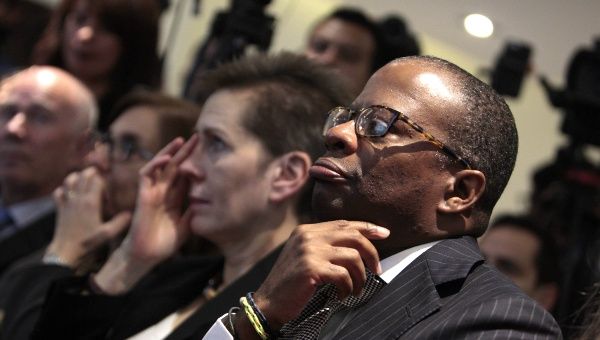 Todd Robinson used to be U.S. Ambassador to Guatemala before being sent to Caracas. July 16, 2015. | Photo: EFE

Diplomat Todd Robinson has constantly interfered in Venezuelan politics since his appointment to Caracas.

March 13 (teleSUR) The Venezuelan Foreign Ministry delivered Tuesday a protest letter to U.S. Embassy’s Charge d’Affaires Todd Robinson, in which the Bolivarian country expressed its rejection towards his hostile attitude and constant provocations, typical of an opposition leader.

Robinson recently used the embassy’s official social network accounts to criticize Venezuela’s decision to hold elections on May 20, and the foreign ministry considers it a violation of the Vienna Convention and the diplomatic mission’s role in Caracas.

In the letter, the Foreign Ministry’s Vice Minister for North America Samuel Moncada “strongly condemns” the interventionist declarations by the U.S. diplomatic mission about the upcoming elections.

In recent days Robinson was interviewed by an opposition news outlet and suggested the Venezuelan military should do a coup against the current government.

The Venezuelan government says that U.S. interventionism in Venezuela wants to promote “violence in the most radical sectors of Venezuelan society,” and is demanding their diplomats to “stop pretending to impose their will on Venezuela and limit themselves to carrying out their duties in accordance to international law and in respect of the principles that rule relations between sovereign states.”

Venezuela has expressed its concerns about Todd Robinson’s interventionist attitude several times since he arrived, which has earned him popularity among the opposition social circles he often visits.

Venezuelan President Nicolas Maduro has said the U.S. mission is promoting a coup against his government.

The last U.S. ambassador for Venezuela left the country in 2010 and Chavez refused to accept his replacement. Since then, both countries have only had Charge d’Affaires in their respective diplomatic missions.