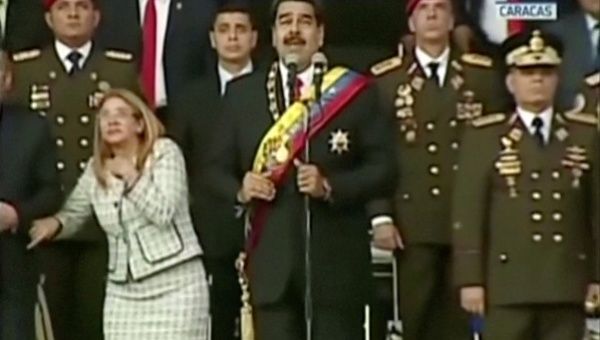 President Maduro (C) and his wife react as a drone is detonated during the National Armed Guard’s anniversary event. | Photo: Reuters

The Venezuelan government accused U.S. President Donald Trump’s administration of bias, and said Trump himself had publicly advocated the use of torture.

In a statement published by Foreign Minister Jorge Arreaza on Twitter on Friday, the Venezuelan government accused U.S. President Donald Trump’s administration of bias, and said Trump himself had publicly advocated the use of torture.

“Likewise, Venezuela is not the country that indefinitely detains immigrants in detention centers or that has reached the point of separating children from their parents, leading them not only to emotional trauma and the systematic violation of their rights, but also exposing them to atrocities such as sexual abuse and even the forced consumption of psychotropic substances, as denounced by Judge Dolly Gee.”

In the original statement, U.S. State Department Spokesman Heather Nauert accused the Venezuelan government of arbitrary detention; violating parliamentary immunity, and the use of torture to extract confessions.

“We join the international community in calling for an independent expert commission to investigate the August 4 incident,” Nauert wrote.

The Venezuelan government has arrested dozens of suspects and laid initial blame for the attempted assassination at the feet of Colombia’s former President Juan Manuel Santos in collusion with the Venezuelan opposition and agents in the United States.