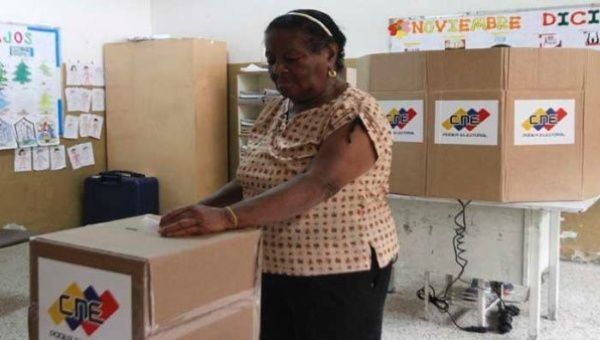 A woman casts her vote at a polling station during a nationwide election for new mayors in Caracas, Venezuela December 10, 2017. | Photo: Reuters

The spokeswoman for the US State Department, Heather Nauert, insisted on an alleged “restoration of democracy in Venezuela.”

Venezuelan Foreign Minister Jorge Arreaza condemned on Monday statements made by the U.S. government against the democratic system of the South American nation, where municipal elections were held on Sunday, the third elections in the last six months.

“The ridiculous statements by the spokeswoman of the State Department about the municipal elections denote the impotence and desperation of the supremacist government of Donald Trump before the successive victories of democracy and the Bolivarian people of Venezuela.” Reads the tweet by Venezuela’s foreign minister.

According to official sources, State Department spokeswoman Heather Nauert spoke out against the decisions of Venezuelans and their government. He also insisted on a supposed “restoration of democracy in Venezuela.”

For its part, the president of the National Constituent Assembly of Venezuela (ANC), Delcy Rodríguez, said that after the result obtained this Sunday the U.S. Government was defeated.

According to the information handled by the Zamora 200 political campaign command, the revolutionary government won 308 of the 335 mayorships in Venezuela, which represents 92 percent of the charges disputed in the municipal elections held this Sunday, December 10.