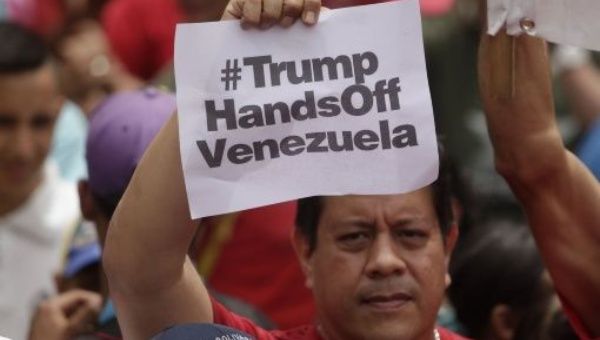 The Venezuelan Foreign Ministry issued an official report repudiating the false accusations and the repeated assaults by the U.S. authorities against the government of Nicolás Maduro.

Jan 21 (teleSur) The Ministry for Foreign Affairs of Venezuela released an official document on Friday in which it rejected “categorically” the recent statement issued by the Government of the United States which, according to the complaint by Venezuelan authorities, evades the responsibility of that nation in the repeated aggressions against the people of Venezuela and while launching false accusations against the Government of President Nicolás Maduro.

“Venezuela rejects the distorted interpretation that the US Government has given to the accusations that (…) the Venezuelan authorities have made to alert the world about the serious threat that hangs over our country”, begins the official statement.

The document denounces that the Trump administration “finances, protects and encourages groups that are violently seeking the removal of the government,” and that “it articulates an international strategy, obscenely pressuring sovereign nations to join this strategy.” of neo-colonization of Venezuela “.

He added that President Maduro “has made permanent calls to the Government of Donald Trump to rebuild relations based on respect, dialogue and non-interference”, to which Trump has responded by increasingly breaking the relations between both countries.

“The U.S. government has tried to impose illegal unilateral sanctions, it has financed terrorism, it has supported extremist groups, it has made calls for the insurrection to the Armed Forces, going so far as to threaten Venezuela with military intervention,” the statement said.

Venezuelan authorities demanded the end of aggression against the country and reiterated “the bonds of brotherhood with the people of the United States of America, of which we have received countless signs of solidarity and rejection of the outrage committed by their Government.”