Posted on November 4, 2017 by Anthony Brenner 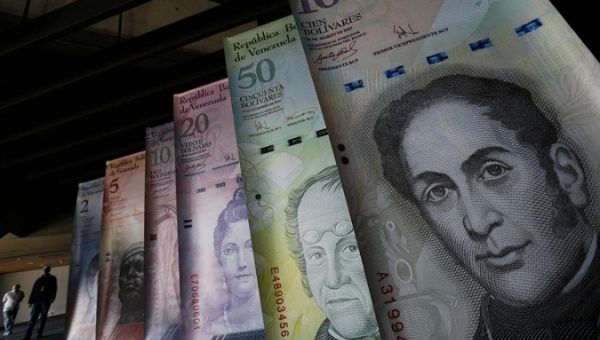 Samples of Venezuela’s currencies are displayed at the Central Bank building in Caracas. | Photo: Reuters

Vice President Tareck El Aissami announced that his government will meet with bondholders on Nov. 13.

Nov 3 (Telesur) – The Venezuelan government has announced plans to refinance and restructure the country’s foreign debt in order to overcome the “blockade and foreign persecution.”

President Nicolas Maduro appointed Vice President Tareck El Aissami to lead the presidential commission responsible for the restructuring, which will begin with changes within state oil company Petroleos de Venezuela, or Pdvsa, the main source of income for the Venezuelan government.

“Venezuela has responded and responds to its obligations, despite sanctions from the U.S. government,” El Aissami said during a press conference Friday.”We will initiate a sovereign process to address our debt with transparency.

“El Aissami also announced that his government will hold a bondholders meeting on Nov. 13 to reaffirm Venezuela’s commitment to paying off its debts.

“We’re going to begin a complete reformatting. To find an equilibrium, and to cover the necessities of the country, the investments of the country,” Maduro said upon announcing the measures.

“We have to pay the amount of US$1.121 billion from the Pdvsa 2017 bonus and we have the money to fulfill this obligation,” the head of state announced, adding that the government also has resources to continue providing necessities to Venezuelans.

Maduro also noted financial aggression, in the form of sanctions, coming mainly from the United States, which is exacerbating the financial situation in Venezuela.

Despite the Venezuelan government having made large payments over the past four years, the country still has a high risk percentage, which analysts suggest is a result of sanctions against the South American nation.

Maduro and Aissami plan to restructure the government’s debt to allow for social services to continue as normal.

El Aissami pointed out that Euroclear, one of the world’s largest security transaction firms, blocked the Venezuelan government from paying “an order of 1.2 billion dollars in bonds,” without providing further details.

The Venezuelan government and Pdvsa do not face new capital payments for the remainder of the fiscal year, but they are scheduled to pay around $800 million in interest for their security bonds, which are due for payment in November and December.

If the government does not reach a solution, it could lead to a default which could cause sweeping problems in the Bolivarian nation.As CNN notes, U.S. investors could seize on the opportunity to try to gain legal control over Venezuela’s vast oil reserves, the largest in the world.

El Aissami is sanctioned by the U.S. government and unable to do business in the U.S. over alleged drug trafficking charges, which he denies.Maduro has criticized the barriers that Venezuela faces in its restructuring.“Today, if Venezuela wants to go out to the world to refinance one of these bonds we have to pay, it can’t. It’s prohibited by the global financial dictatorship of the North American empire,” Maduro said.

Pdvsa said in a statement that the company would make good on its payments “despite the economic war, unjustified imposition of sanctions by Donald Trump, and the sabotage, persecution and financial blockade to which the Republic and its institutions have been subjected by a significant portion of the international financial system as commanded by imperialism.”