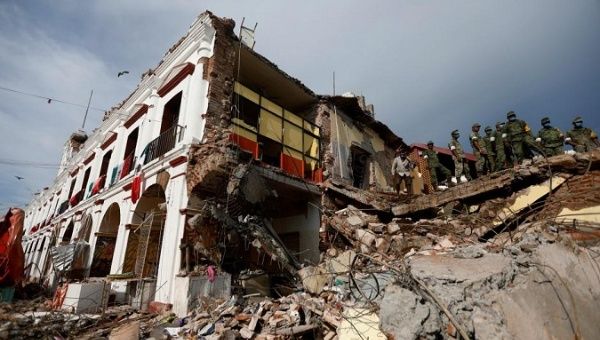 Soldiers work to remove the debris of a house destroyed in an earthquake in Juchitan, Mexico, on September 8, 2017. | Photo: Reuters

Mexico was hit by the most powerful earthquake in over eight decades on Friday.

The Venezuelan government has expressed condolences and solidarity with the peoples of Mexico and Guatemala, affected by the powerful 8.1-magnitude earthquake that struck both nations.

“The Bolivarian Government of Venezuela expresses its deep sorrow for the victims of this unfortunate natural event, and sends its condolences to all the Mexican and Guatemalan people and in particular to all the families affected,” a statement published by the Foreign Ministry said.

The U.S. Geological Survey, USGS, said the quake’s epicenter was 87 km southwest of the town of Pijijiapan at a depth of 69 km. It was the strongest quake to hit Mexico in over eight decades.

At least 65 people have died and at least 200 others were injured in Mexico. In neighboring Guatemala, one person has reportedly died.

As the death toll continues to rise, Mexico’s President President Enrique Pena Nieto has declared three days of mourning for the victims.

The Venezuelan government also expressed its support and willingness to help both Mexico and Guatemala in the process of caring for victims and rebuilding the areas affected by this strong earthquake.

“The Government of the Bolivarian Republic of Venezuela, faithful to its policy of solidarity, makes available to the governments of Mexico and Guatemala all the support they require in order to care for the victims and to collaborate in the rescue and reconstruction works,” the statement said.