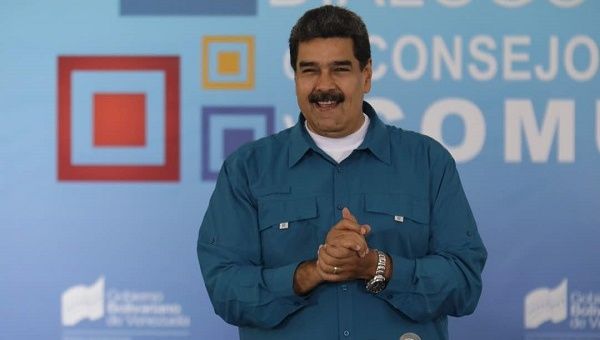 “I forgive my enemies and I ask for justice; I put up my hand and call for a great peace and a great national dialogue,” Maduro said. | Photo: @DPresidencia

“I forgive my enemies and I ask for justice; I put up my hand and call for a great peace and a great national dialogue,” President Maduro said.

June 7 (teleSUR) Venezuela’s President Nicolas Maduro has renewed his call for national dialogue with opposition sectors, urging them to consolidate peace  in the face of violent acts intended to destabilize the country.

“In the face of violent plans I invoke peace and I say to them, to everyone: if anything is worth the word of a revolutionary son of Chavez, I forgive you and I call you to make a vow for peace, to abandon the path of conspiracy, of interventionism. I cry for peace, I fight for peace,” Maduro said.

Addressing a meeting of communes in Miraflores Palace, Caracas, Maduro referenced the recent release of opposition politicians and activists awaiting trial in connection with violent acts that killed nearly 200 people between 2014 and 2017.

Almost 80 people have so far been released by the Venezuelan government as part of the ongoing process of dialogue and national reconciliation. In the next few days, fresh procedural benefits will be granted to those involved, Maduro said.

“I forgive my enemies and I ask for justice; I put up my hand and call for a great peace and a great national dialogue,” the president said, noting that he is “taking all the steps for peace and reconciliation.”

Maduro also rejected ongoing U.S. interference via the Organization of American States (OAS) and said U.S. Vice-President Mike Pence, who failed in a bid to pressure members to approve Venezuela’s expulsion, had been defeated.

“We have been victorious… We are going to celebrate our freedom from the OAS; we are going by our own decision,” the president said. “We have to move forward even more because the future of Venezuela goes far beyond the OAS.”