Posted on December 8, 2017 by Anthony Brenner 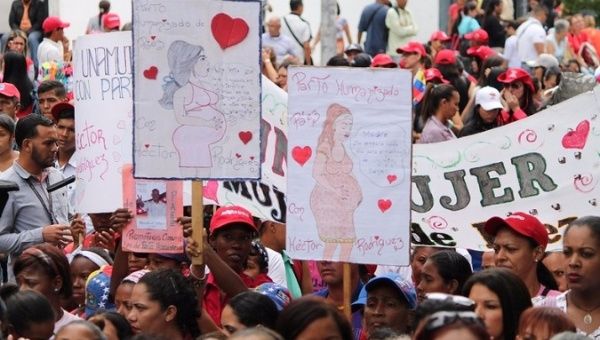 The goal of the Women’s Ministry is to train 10,000 community activists to become “doulas,” or midwives, in order to “revolutionize” maternal healthcare.

Dec 7 (teleSur) Venezuela’s Humanized Childbirth Plan, launched earlier this year in response to demands from women’s organizations, is making a positive impact in communities throughout the country, Venezuela Analysis reports.

Launched by the Ministry for Women and Gender Equality, the program seeks to fulfill the demands of the humanized birthing bill that feminist and women’s organizations proposed two years ago.

Despite initially passing Congress, the bill was later abandoned after Venezuela’s opposition won a parliamentary majority at the end of 2015.

The plan includes the construction of pre-birthing centers; shelters for pregnant women living in extreme poverty; community outreach, and training for medical professionals and public officials.

It also includes training thousands of community activists as “doulas,” or midwives, who have now reached the plan’s community outreach stage.

“We have been deployed since we finished our training, it has been a very satisfying experience,” midwife Saily Gimenez, from Caracas, told Venezuela Analysis.

“We already have six circles of women: among them, we have pregnant women and women who are breastfeeding. We facilitate everything like body consciousness; training in sexual and reproductive rights; in breastfeeding, and we give them support.”

The goal of the Women’s Ministry is to train 10,000 community activists, providing care for the approximately 500,000 women who are pregnant in the country at any one time.

The bill was organized by feminist and women’s groups as concern rose over the soaring rate of maternal deaths, exacerbated by sanctions and other international pressures on Venezuela.

Maternal deaths, said Virginia Martinez from feminist organization Mujeres Por La Vida (Women for Life), are “getting even higher in the period of 2015, 2016 and 2017 as the economic war has deepened in our country.”

As such, it is hoped the government’s program will continue to benefit women throughout the country.

“We have understood that those 500,000 pregnant women are the state’s responsibility and, as a revolutionary government, we are responsible for accompanying them,” Asia Villegas, vice-minister for gender and equality in the Women’s Ministry, told Venezuela Analysis. “Accompanying them means guaranteeing that they have a happy, wanted and safe pregnancy.”

For the community organizers — who are all women — the plan is already an achievement.

“This plan is an excellent tool to sensitize all of us, not just as human beings, but as a country,” said Valentina Fagundez, another midwife. “If we are born with violence, then we will be violent people. If other countries could copy this system, then humanity would be much more loving.”