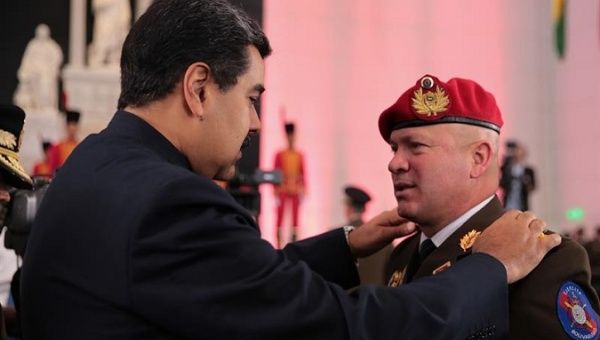 “A military intervention from the United States empire will never be a solution for the problems in Venezuela,” said Maduro.

July 5 (teleSUR) Venezuelan President Nicolas Maduro has called on the country’s armed forces to remain alert and stand ready to protect their country’s sovereignty during a military ceremony Wednesday. The call comes following reports, which state United States’ President Donald Trump repeatedly raised the possibility of invading Venezuela and asked advisors to make plans to do so.

“You cannot lower your guard for even a second, because we must defend the greatest right our homeland has had in all of its history,” Maduro told the attendees, “which is to live in peace.”

“A military intervention from the United States empire will never be a solution for the problems in Venezuela,” he added while said while point out the crippling impact U.S. led sanctions have had on the South American country.

In August last year, Trump publicly said he had “many options for Venezuela, including a possible military option.” The remarks were condemned by governments around the world that stand in defense of national sovereignty. At the time, Trump didn’t go further with his comments, but the Associated Press recently reported there were serious talks about carrying out an intervention behind closed doors.

Trump, reportedly, called for a surprise meeting with his top aides and advisors a day before the declaration and asked them why couldn’t the U.S. intervene militarily against the Bolivarian government, arguing that Venezuela represented a threat to the region.

AP quoted an anonymous senior official saying that Trump’s team were shocked by the question and that advisers took turns to try to talk him out of his intentions. Such a declaration can’t be taken lightly, especially coming from a country with a long history of military interventions in Latin America.

“When I denounced this last year the very same U.S. government said I was lying. Today, we have a confirmation,” said Maduro.

Even though Trump’s officers ruled out this idea and tried to convince the president sanctions were the best way to attack the Bolivarian government, he wasn’t entirely convinced, as the comments in his speech the day after showed.

Bolivian President Evo Morales has denounced Trump’s plan to convince other Latin American governments to support the intervention in Venezuela.

“In September 2017, four Latin American presidents were invited to a diner with President Trump, where he proposed a military intervention on Venezuela, the brothers presidents rejected this threat on dignity and sovereignty. The #GreatHomeland is no backyard to the North American empire.”

Different media reports say Colombia’s Juan Manuel Santos was among these presidents, but it’s still unknown who were the other three.