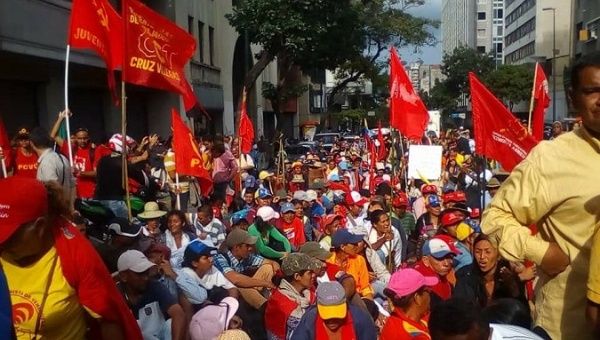 Campesinos march to Caracas to ask for government support in the agri-food production process. | Photo: Activists

The campesinos began the march to Miraflores Palace on July 12, with the twin objectives of making their voices heard and asserting their rights.

August 2 (teleSUR) After walking for 21 days and traveling more than 400 kilometers, the Peasant March finally arrived in the capital Caracas and met with Venezuelan President Nicolas Maduro Thursday.

“This march was necessary to awake the national consciousness of what’s happening deep inside Venezuela and lift the national struggle,” Maduro told the campesinos and social organizations.

The march leaders, campesinos from across the country, left Portuguesa state’s capital, Guanare, on July 12 for Miraflores Palace. Their aim was to make their voice heard, assert their rights and present their proposals before the national government.

Arbonio Contreras, one of the campesinos, said: “This march has turned into a hug with peasants, students, young people, children. We hugged with artists, singers in a march nobody wanted to cover and only alternative media did.”

Maduro said the meeting will produce a concrete commitment and a defined agenda, as well as solutions: “The result of this march and the struggle ahead must be a work agenda to find solutions for the problems you have brought up: an agenda of concrete action in agrarian policy, productive policy and fair, constitutional and legal distribution of land in Venezuela.”

Several leaders spoke at the event in front of national media, addressing President Maduro with messages of support as well as strong criticisms of certain government policies and a perceived lack of support.

They belong to collectives, campesino councils and Zamorano farms grouped under the Platform of Peasant Struggles and are presenting proposals to strengthen the sector, which suffered decades of abuse by corporations and landowners before the socialist governments of late President Hugo Chavez and Maduro introduced reforms.

Promising further agrarian reforms, Maduro said: “The struggle for land has been going on for 500 years since our ancestors were stripped of their lands. What did the European colonial empires come for? To take away land, rivers and seas from us.”

Peasant communities provide 70 percent of the food consumed in the country and they have been key in helping Venezuela fight the economic and financial war that seeks to annihilate the Bolivarian experience. 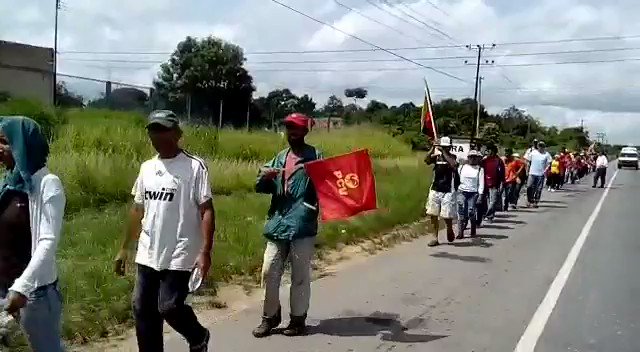 “Peasants March from the western plains on their way to Caracas to ask the Bolivarian government for support in the agri-food production process.”