Posted on September 26, 2018 by Anthony Brenner 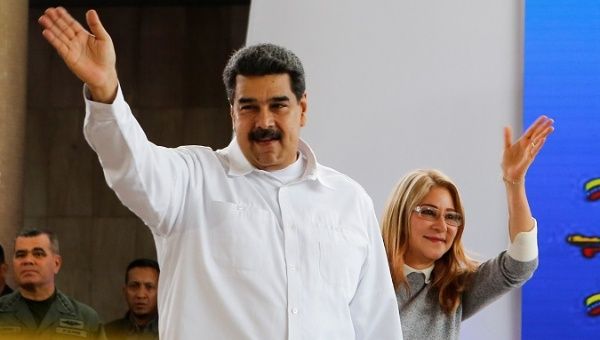 Telesur | Sept. 25, 2018 — Venezuela’s President Nicolas Maduro reacted on Tuesday (Sept. 25) after the United States imposed new sanctions on his wife and key allies including the vice president and defense minister, accusing them of plundering the country’s wealth and helping Maduro maintain his grip on power.

“The United States will continue to take concrete and forceful action against those who are involved in the destruction of democracy in Venezuela as well as those who are enriching themselves at the expense of the Venezuelan people,” the Treasury Department wrote in a statement.

The Trump administration has levied several rounds of sanctions against Maduro’s government since 2017 as part of the economic war it is waging against the socialist government.

“Today, the government of the United States released one of those decrees that they tend to release with a list of sanctions against the first lady of Venezuela Cilia Flores. Nothing like this has ever been seen,” Maduro said during an event in Caracas. “If you want to attack me, then attack me but don’t go after Cilia, don’t go after a family.

Meanwhile, from the United Nations headquarters in New York, Foreign Minister Jorge Arreaza spoke to reporters where he denounced Trump’s comments in favor of military coup against Maduro while also slamming right-wing government aggression against his government. Arreaza also revealed that his team was banned from entering a meeting on Venezuelan migration organized by Colombia at the United Nations.

“The only thing Trump hasn’t done yet is to take the UN charter and rip it up right there at the U.N.,” the Venezuelan top diplomat told reporters. “For us, capitalism is a disease, but that does not mean we don’t recognize capitalist countries. It’s a question of sovereignty,” he added in reaction to Trump’s comments saying that “socialism is a disease” that has caused the struggles Venezuela faces instead of Washington’s sanctions and economic war.

During the speech in Caracas, the Venezuelan president also said he will issue a decree to naturalize all immigrants in Venezuela. “I will proceed to sign a decree where I make legal 8,381 immigrants from various parts of the world and support the migration of the world,” Maduro said at a meeting with international representatives visiting Venezuela.

The Venezuelan leader dared U.S. President Donald Trump to do the same and legalize Latin American immigrants as per his own example.