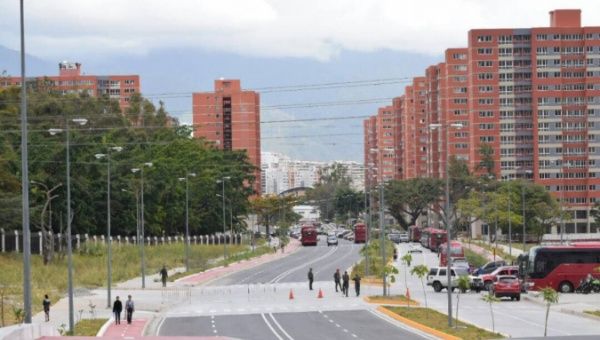 In spite of external pressures, the Bolivarian revolution has provided clear benefits to the poor in the form of programs like the Great Housing Mission Venezuela or GMVV.

Dec 27 (teleSur) Illustrating the benefits of the Bolivarian revolutionary process for the disadvantaged and historically divested nations of the Global South, the government of Venezuela is closing the year 2017 with the delivery of nearly 2 million homes to poor families under the auspices of the Great Housing Mission Venezuela program or GMVV, per the program’s Spanish acronym.

According to Housing and Habitat Minister Ildemaro Villaroel, by week’s end, the government will have delivered 8,881 new homes within the year alone in various states across Venezuela, achieving the government’s goals for the project. In total, 1,926,448 homes were distributed to needy families across the South American nation.

According to a report published by the Great Mission Barrio Nuevo – Barrio Tricolor (GMBMBT), over 4,000 homes were also rehabilitated in 2017, reaching a total of 569,218 restored homes throughout the country.

Meanwhile, over 947,000 Venezuelans are anticipating the reception of their deeds to the properties from the National Land Institute.

In a ceremony held in the Sucre municipality of Portuguesa state, program beneficiaries were overjoyed by the state-sponsored rehabilitation of their homes. Renovations included the replacement of roofs, repainted walls, the installation of new bathroom kits, and new doors for entryways and rooms as well as windows – crucial home improvements that ensure the dignity of residents as well as their safety.

“Firstly I am so thankful to God and to this program, words can’t describe my feelings – these huge emotions – at seeing my home in such a beautiful state,” said beneficiary Ana Joaquina Linares.

The GMVV was launched by late leader Hugo Chavez in 2011 in response to devastating mudslides that destroyed the homes of thousands of people in late 2010. In light of the program’s initial successes, the GMVV was expanded under an ambitious plan that seeks to provide homes to 3 million people by 2019.

In return for low-rate monthly mortgage payments, families receive lifetime family deeds to their GMVV homes which can only be transferred or sold under exceptional circumstances.