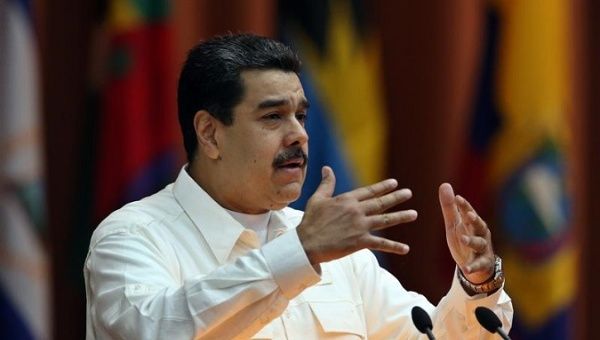 President Nicolas Maduro, who has blamed the black-out on the U.S. government and Miami-based “terror groups.” | Photo: EFE

Dec 21 (teleSur) A man has been arrested for “electric sabotage” following a black-out in Venezuela which plunged the capital, Caracas, and the states of Miranda and Vargas into powerless darkness for six hours on Monday.

Minister of Electricity Luis Motta comfirmed the arrest on Wednesday in the wake of the attack which left mobile phones and subway trains largely inoperable. The identity of the suspect has not yet been made public.

President Nicolas Maduro blamed the black-out on the U.S. government and Miami-based “terrorist groups” identifiied in a state investigation. “I say to these groups in Miami, these terrorist groups, and I say to Donald Trump’s government: you will not suceed in hijacking Christmas from Venezuelans,” he said on Tuesday.

Motta has confirmed that “the explosion was provoked by human beings,” noting that investigators had found a rudimentary pole with a hook near the affected substation, and that the line protections normally in place had been deliberately disabled.

The black-out followed a separate attack on a Venezuelan military base the previous weekend, for which former policeman Oscar Perez has already claimed responsibility. Perez, who is still at large, said the attack was part of a plan to “restore” liberty to Venezuela.

This year there have been several such attacks on Venezuela’s power grid, incidents which “increase 80%” when there are electoral processes underway, according to Vice-President Jose Vicente Hoy.

The president of the National Electric Corporation said the goverment has developed a plan together with the Armed Forces, governors and mayors to guard electric plants across the country.