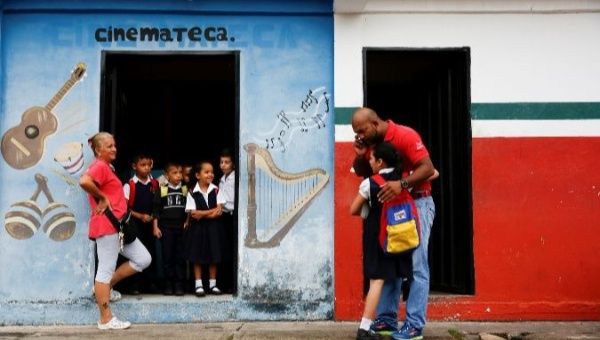 Teachers and other educational workers have praised the agreement, saying that it’s a major step forward in consolidating their rights.

April 13 (teleSUR) A new collective contract titled the II Unitary Collective Contract 2018 – 2020 was signed between education workers and the Venezuelan government on Tuesday. Coming into effect immediately, the terms of the contract guarantee a 100 percent pay raise, stronger social protection, especially for disabled workers and pensioners, and will benefit over a million unionsied and non-unionised workers, including 500,000 teachers, 152,000 laborers, 79,000 adminsitrative workers, 67,000 kitchen workers and 205,000 retired workers.

Teachers and other educational workers have praised the agreement, saying that it’s a significant step forward in consolidating worker rights.

Venezuelan President Nicolas Maduro welcomed union workers and other educational representatives into the presidential palace Tuesday to partake in the official signing of the new collective contract. “We are signing one of the most important collective contracts in the country,” he said. “This is a collective contract created via socialism; it is progressive, modern, advanced, based in the future.”

Orlando Perez, president of the National Unitary Magisterial Force Union, said: “This contract attempts to achieve unity of the workers, of the administrators, of the teachers, the students, and the communities, it is not just about workplace conditions, it is a collective contract which projects a humanist model.”

Meanwhile, Jose Garcia Torres from the National Union of Education Ministry Employees said the “solidity of the unions” resulted in “the best collective contract so far.”

The II Unitary Collective Contract 2018 – 2020 was the result of months of negotiations between trade union federations and the national government.