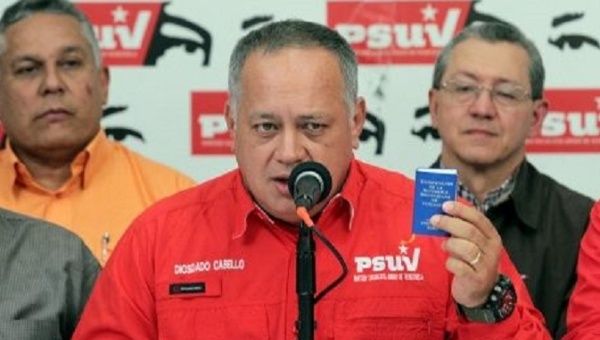 March 8 (teleSUR) The vice president of the United Socialist Party of Venezuela (PSUV), Diosdado Cabello, denounced the plans of the country’s opposition to create social conflict after the May 20 presidential and legislative elections.

Cabello said that the opposition Democratic Unity Roundtable (MUD) “wants to buy time” as they prepare to stir conflict in the coming weeks.

He also said that the opposition wants to do this despite the continued guarantees offered to them by the National Electoral Council (CNE).

The socialist party leader said that the plans of the Venezuelan right are similar to that of the Nicaraguan opposition, who decided not to participate in the 2016 presidential elections because they considered it an “electoral farce.”

Cabello farther said that the MUD will take a cue from their “protectors”, the United States government, in the execution of their post-election plan.

While the MUD has announced they will not take part in the elections, other parties that make up the opposition guild in Venezuela, such as Avanzada Progresistas, Copei and Movimiento al Socialismo (MAS), are all supporting the candidate Herni Falcon, who has registered his presidential candidacy before the CNE.