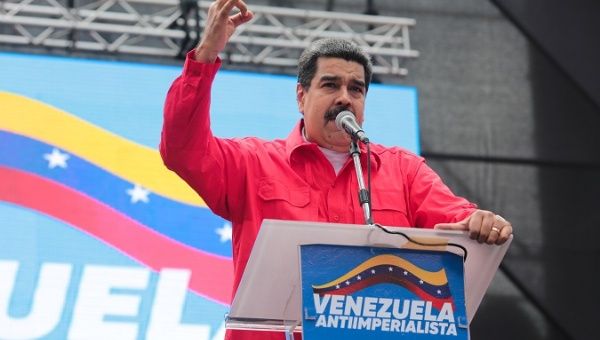 The letter stated that Venezuela’s exclusion from the summit signifies how the U.S. has consistently tried to maintain “hegemony” over the South American country.

The letter delivered by Samuel Moncada, Vice Minister of Foreign Affairs for North America and Representative of the Bolivarian Republic to the United Nations, also targeted the diplomatic delegations of Canada, Guyana and the member countries of the Lima group.

The Lima group is a coalition of right-wing governments constituted in August 2017 with Argentina, Brazil, Canada, Chile, Colombia, Peru and others.

In the document, the Venezuelan government expressed its “strongest rejection” of agreements that “not only constitute a hostile and unfriendly act against an independent and sovereign country but also flagrantly violate the precepts of the Charter of the United Nations and the norms of international law.”

The document denounced the “concrete reference to the Declaration issued by the self-styled Lima Group (…) in relation to the situation in Venezuela” during the summit.

“Venezuela on Tuesday delivered a new protest note to the US diplomatic mission accredited in Caracas, in rejection of the interference that Washington maintains in the internal affairs of the South American country,” the Foreign Ministry noted on its website.

Peruvian economist, Oscar Ugarteche, also called out the “hollow declarations” made at the recent Summit of the Americas which took place in Lima, where, he noted, half of the countries attending were more concerned about planning an agenda against Venezuela than talk about tackling severe corruption problems plaguing the continent.

In the article, “The Distracted Summit,” referring to the VIII Summit of the Americas  which took place on April 13 and 14, attended by all the right-wing Latin American leaders, Ugarteche, of the Institute of Economic Research of the Autonomous University of Mexico (UNAM), shed light on the summit’s destructive and divisive role in the region.

“In sum, the summit in Lima shows that half the hemisphere will recognize the Venezuelan elections and no half and that there is a problem of corruption that must be addressed,”  the UNAM researcher concluded.

“Although large capitals are accomplices and promoters of corruption around the world, in Latin America it has also been a source of increased production, low productivity, a flight of public and private resources, increased uncertainties, curbing investment, and therefore economic stagnation,” Ugarteche, noted.

Venezuela’s president, Nicolas Maduro, described the VIII Summit of the Americas as a “complete failure” during a speech he delivered in Caracas Saturday.

“I was seeing reports of some empty speeches by right-wing, unpopular, murderous, imperialist lackey presidents,” Maduro said during his Saturday speech. “It’s shameful seeing those presidents, hated by their peoples, speak about Venezuela’s noble people.”

Further adding that the US president, Donald Trump canceled his visit to the summit so that he could ” to oversee a possible military action in Syria,” although “it is speculated that the real cause of his change of plan and the absence of support measures against Venezuela.”

Venezuela’s letter also bashed the Organization of American States (OAS) for choosing Peru as the host country for the eighth summit on “Democratic Governance in the Face of Corruption,” a country which “just lost its president in the midst of a corruption scandal (Pedro Pablo Kuczynski).” And the country that “pardoned another former president who was imprisoned for corruption and genocide (Alberto Fujimori), not counting the cases of a former president who is in prison (Ollanta Humala) and another who had his repatriation requested by the Justice ( Alejandro Toledo).”

The letter also shed light on the role the left-wing governments played in dismantling U.S..led trade deal, Free Trade Area of the Americas, FTAA, as the “first project was defeated at the Mar del Plata meeting in 2005, thanks to the alliance of Hugo Chavez, Lula da Silva and host Néstor Kirchner against US President George W. Bush, and today it is farther than ever to come true.”