Venezuela Denounces Illegal Meeting Convened by the US in UN 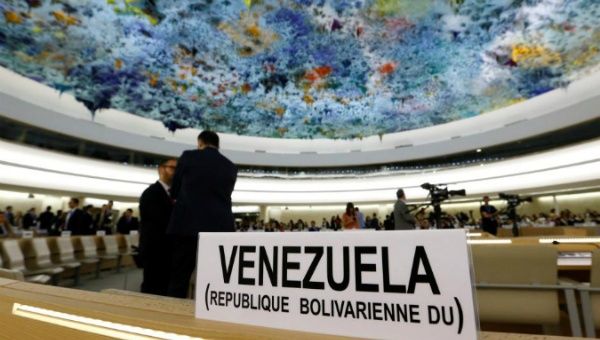 For Caracas, the meeting was clearly meant to further plans to overturn the Bolivarian Revolution

Nov 13 (Telesur) The United States crusade against the Bolivarian Republic of Venezuela took a fresh turn Monday as an informal meeting of the United Nation’s Security Council was held to hear first-hand accounts of the ongoing crisis in the oil-rich socialist nation.

The meeting was held under the “Arria-formula,” which is when the Security Council members proposing the meeting organize it informally, convening the meeting outside of the typical format while obliging all 15 members to participate. The U.S. led the effort to convene the session, recruiting junior partner and current Security Council chair Italy to back the request.

In a note circulated to members of the council last Friday, the “to discuss the role the international community and regional organizations can play in seeking a political solution and facilitating humanitarian access to those affected by the tensions.”

Speakers at the open meeting included several figures who have long opposed the government of Venezuela, creating impressions in Caracas that the meeting was simply a move meant to further plans to overturn the Bolivarian Revolution led by late President Hugo Chavez.

Almagro has spearheaded attacks against the government of President Nicolas Maduro, which it accuses of gross rights violations and an authoritarian governance. The OAS head has remained silent over rights violations in Brazil, Colombia and Mexico.

Hussein has lodged groundless claims that Venezuelan security forces are guilty of “crimes against humanity” perpetrated during the violent opposition protests of recent months which left more than a hundred dead.

Caracas insists that there is currently an international crusade led by the White House, whose main objective is to seize the largest oil reserves on the planet, scene denounced by Venezuelan ambassador here, Rafael Ramírez, in a recent interview with Prensa Latina.

Venezuela’s government has faced international attacks simply for surviving in the face of a brutal economic war and campaign of media terrorism waged against it. The campaign reached its peak before the new Constituent Assembly was elected with the overwhelming support of the Venezuelan people.

In October, the socialist government won another boost of popular support after major successes in the gubernatorial elections.

Contrary to 70 international observers who attested to the veracity of last month’s regional elections, the U.S. and EU both accused the Venezuelan government of corruption while failing to cite evidence of malfeasance.

The Arria-formula meeting shows the extent to which the U.S. and its allies are uninterested in calming the unrest that’s gripped Venezuela in recent months throw such means as the ongoing dialogue between government and opposition, instead choosing a course that violates the sovereignty, dignity, independence and self-determination of the people of Venezuela.

After the meeting,  Venezuela and its allies condemned the intromission into their internal affairs.”Venezuela will solve its internal problems within the framework of its laws and its Constitution, we do not accept interference or tutelage,” said the country’s ambassador to the UN Rafael Ramírez.

Ramirez went further and said that  “This farce today is a hostile act by the US and clearly an interventionist act that violates the principle of sovereignty of a member state of the United Nations,”

Alongside representatives of Bolivia, Russia and China, the Venezuelan official rejected this act of “political manipulation by the US as a permanent member of the Security Council, who abuse their prerogatives and power to try to impose their geopolitical agenda in prejudice of multilateralism and peace “.