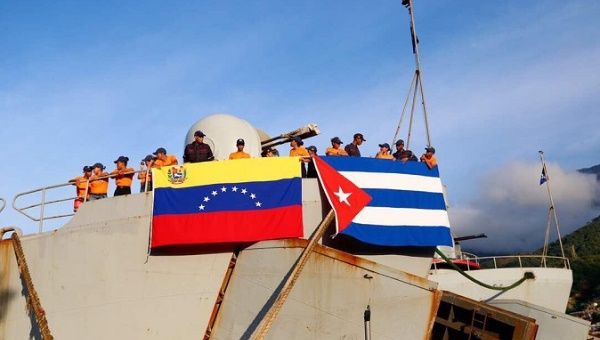 The shipment was the second from Venezuela to Cuba. | Photo: Twitter / @NestorReverol

Cuba has received an outpouring of worldwide support and solidarity in the wake of the Category 5 hurricane.

Venezuela sent its second shipment of aid to Cuba Thursday, which was struck by Hurricane Irma last week.

According to the Minister of the People’s Power for Interior Relations and Justice of Venezuela, Nestor Luis Reverol Torres, the country has delivered 600 tons of reconstruction materials, electricity supplies and appliances to Cuba, including doors, railings, paint, wash basins, sinks, and ceilings.

“Hurricane Irma has caused severe damage to the island’s infrastructure, agricultural sectors and electrical and telecommunications systems,” the Minister tweeted through his official Twitter account, adding that it was under the leadership of President Nicolas Maduro that the delivery was made.

“1. By Pdte @NicolasMaduro instructions’ we are sending 600t of different construction materials, electricity and appliances to #Cuba.”

“The legacy of Marti and Bolivar guides us and following his legacy, Commander Chavez and Fidel created ALBA for integration (on the continent),” Torres tweeted, citing a number of late South American revolutionaries.

“Our gratitude to the people of Venezuela, the Commander-in-Chief, Nicolas Maduro Moros, the Bolivarian government, and the brotherhood of peoples, made evident in this act what it is we are doing here today, thank you very much,” Cuba’s Venezuelan business manager had said in gratitude then.

Cuba has received an outpouring of worldwide support and solidarity in the wake of the Category 5 hurricane that left 10 dead and caused extensive damage to infrastructure and housing.

Elsewhere in Latin America, countries such as Bolivia and Ecuador have expressed willingness to send humanitarian aid, with Panama in the midst of sending 90 tons of food and supplies, according to the nation’s Secretary of Communication.

Across the globe, Russia has also expressed its willingness to help the Caribbean, while Vietnam is formalizing a plan to send Cuba a shipment of aid.