Posted on February 3, 2018 by Anthony Brenner 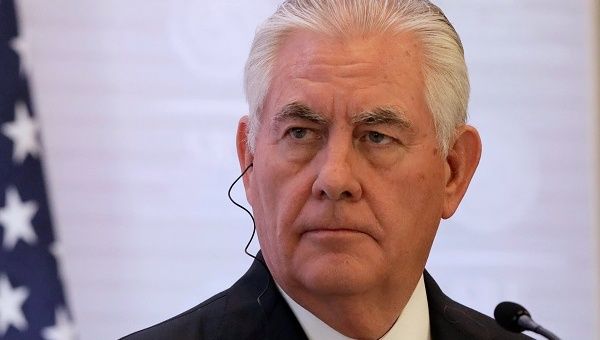 The U.S. secretary of state’s Latin America tour got off to a rocky start after he said Venezuelan President Nicolas Maduro could be toppled by a coup. | Photo: Reuters

Representatives of more than 50 social and political organizations rejected the U.S. secretary of state’s visit to Mexico, where he was declared persona non grata.

Feb 2 (teleSUR) U.S. Secretary of State Rex Tillerson’s first tour of Latin America got off to a rocky start on Friday with U.S. ally Mexico distancing itself from his suggestion that Venezuela’s President Nicolas Maduro could be toppled by his own military.

Tillerson ruffled feathers across the region on the eve of his five-nation tour with comments in Texas defending 19th-century U.S. foreign policy in Latin America and suggesting the Venezuelan army could manage “a peaceful transition” from Maduro, Reuters reports.

Both Maduro and his defense minister condemned the comments on Friday, and even Mexico – no friend of the Venezuelan government – was at pains to say it did not support any non-peaceful solution in the South American country that is engulfed in a political and economic crisis.

“Mexico, in no case, would back any option that implies the use of violence, internal or external, to resolve the case of Venezuela,” Mexican Foreign Minister Luis Videgaray said at a news conference, flanked by Tillerson and Canadian counterpart Chrystia Freeland.

“It will have to be the Venezuelans themselves who find a peaceful route, a peaceful solution to this crisis.”

Tillerson, in Mexico on the first leg of a trip that will also take in Argentina, Colombia, Peru and Jamaica, did not repeat his comments about military action, but reiterated a call for Maduro to reinstate a legislative assembly and hold free and fair elections.

At a political rally later in the day, Maduro said he would not be bowed by Tillerson’s comments. “We will not give in. They don’t know what we are made of,” Maduro said.

Meanwhile, representatives of more than 50 social and political organizations rejected Tillerson’s visit to Mexico, where he was declared persona non grata.

The representative of the binational coalition against Donald Trump, Maria Garcia, told teleSUR: “Tillerson’s tone before leaving for his tour of Latin America was not only interfering, it was insulting, abusive and humiliating because he is an emissary of Trump.

Rosa Maria Cabrera, a member of the Mexican Coordination of Solidarity with Venezuela, said these new forms of interference should be condemned across Latin America and the Caribbean: “Previously there were direct invasions with Marines; today it is through sanctions, media and economic wars.”