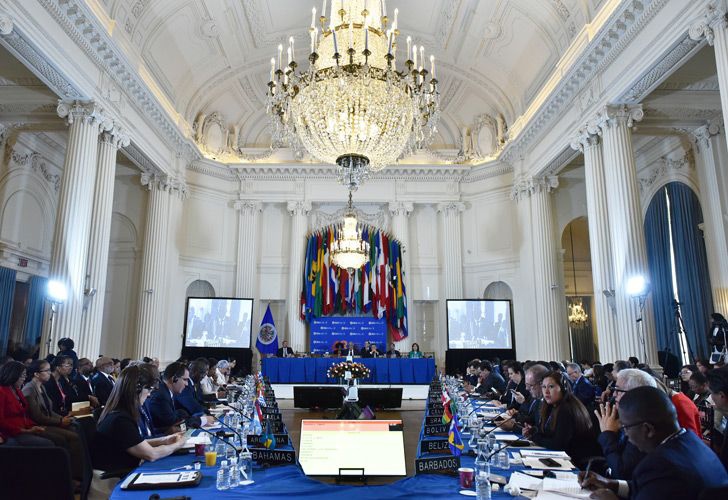 Approved by 19 votes, the measure, nonetheless, falls short of the two-thirds majority needed to invoke the Inter-American Democratic Charter.

The resolution, which alleges fraud in Venezuela’s May 20 presidential elections and calls for political and economic measures “to assist in the restoration of democratic order” to the Caribbean nation, was passed by the vote of 19 countries, with four against and 11 abstaining.

Venezuelan Foreign Affairs Minister Jorge Arreaza spoke out against the measure, which he warned would justify deepening foreign interference in his country, including further sanctions.

“We are concerned that we Venezuelans organize ourselves democratically to solve our problems (…) Lift the sanctions against Venezuela and we will be able to get ahead with our own resources.”

Arreaza also pointed out that those supporting the resolution were paving the way to a military intervention. “Let that be on your conscience,” he added.

The strongest resolution the OAS has formulated so far against Venezuela, Tuesday’s decision could trigger a process leading to Venezuela’s expulsion from the hemispheric organization under the Inter-American Democratic Charter.

The session was preceded by calls by US Secretary of State Mike Pompeo to suspend Venezuela from the body as well as apply “additional pressure” on the Caribbean country, including “sanctions and further diplomatic isolation.”

Nevertheless, the resolution’s 19 signatory countries fall short of the 24 votes needed to obtain an expulsion, which would have to take place in an upcoming OAS extraordinary assembly. Moreover, Venezuela has only 11 months left before it withdraws from the organization by its own initiative as a result of a decision taken last year.

Because the country’s departure from the body is already in process, Venezuelan President Nicolas Maduro made light of the expulsion threat. “When Venezuela leaves the OAS we are going to have a big national holiday,” he said on Monday.

Whereas US Vice President Mike Pence celebrated the decision as a “victory for freedom,”  other continental leaders, such as Bolivian President Evo Morales, spoke out against it.

“We condemn the coup-plotting ambitions of the United States, which is attempting to force an intervention on the fellow people of Venezuela,” the Bolivian leader said via his official Twitter account.

In the history of the OAS, the only countries ever to be expelled are Honduras (briefly in 2009) and Cuba, whose socialist government lives on more than 50 years after the measure was taken and has declined offers to return to the organization, which Havana has repeatedly dismissed as Washington’s “Ministry of Colonies.”