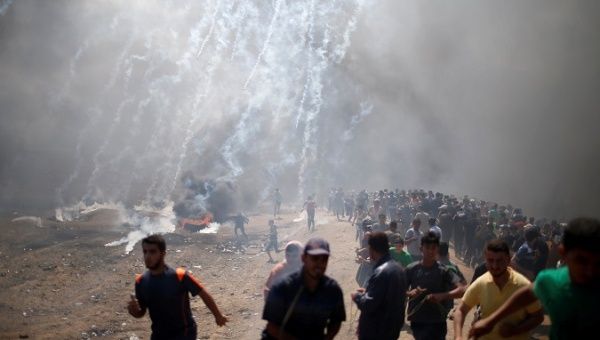 At least 52 Palestinians have been killed along the Gaza Strip during demonstrations against the beginning of the relocation of the U.S. Embassy from Tel Aviv to Jerusalem.

May 14 (teleSUR) Venezuela “firmly condemns” the “violent actions against the Palestinian people,” stated the country’s Foreign Minister Jorge Arreaza on Tuesday in reaction to the Israeli attacks against Palestinian citizens in Jerusalem.

Venezuela, “always aligned with its constant support for the Palestinian people’s cause and its entire right to recover the territories that historically belong to them, joins them in the pain they are going through in such dark times, and joins the relatives of the victims in their mourning,” said a communique.

Venezuela also rejected Washington’s decision to move the U.S. embassy to Jerusalem, which the foreign ministry labeled “contrary to International Right Law” and “undermining the efforts to find a peaceful solution.”

Israel police have deployed thousands of police officers in Jerusalem for the U.S. embassy relocation ceremony.

According to health officials, at least 52 Palestinians have been killed along the Gaza Strip during demonstrations against the beginning of the relocation of the U.S. Embassy from Tel Aviv to Jerusalem.

It was the highest Palestinian death toll in a single day since a series of protests dubbed the “Great March of Return” began at the border with Israel on March 30 and since the 2014 Gaza war.

The health officials said over 2,000 Palestinians were wounded, about 450 of them by live bullets.

Palestinians have long viewed East Jerusalem as the true capital of a future Palestinian State.

The protests are scheduled to culminate on Tuesday when Palestinians mark Nakba Day.