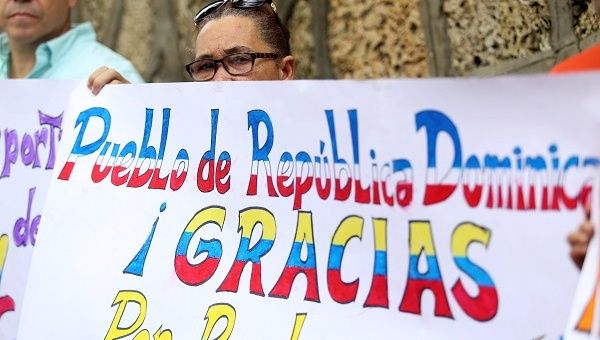 Venezuelan delgates arriving in Santo Domingo hold a sign reading “People of the Dominican Republic, thank you for receiving us”. | Photo: Reuters

Venezuelan Foreign Minister Jorge Arreaza said Saturday that statements by US Under Secretary of State for Political Affairs Thomas Shannon were “revealing.”

Jan 13 (teleSur) Venezuela has lashed out at the United States after it issued fresh threats to impose new sanctions against officials while attempting to derail the dialogue between Venezuela’s government and opposition.

Posting on Twitter, Venezuelan Foreign Minister Jorge Arreaza said Saturday that statements by US Under Secretary of State for Political Affairs Thomas Shannon were “revealing.”

Speaking from Madrid in Spain, Shannon said on Friday that the United States is preparing new sanctions against the government of Nicolas Maduro to convince it to release Venezuela from its current state of crisis.

“There is still a lot of work to be done: from our point of view, sanctions are part of the force to convince the government that the exit from the crisis that Venezuela suffers today depends on a successful negotiation,” Shannon said.

The US official went on to say that the sanctions are not intended to impact the general population, but intended for Venezuelan government officials who “have committed acts of violence against the people.”

In response, Arreaza launched a blistering attack on Twitter: “The statements of Thomas Shannon in Madrid are revealing: he travels to give direct orders to the European Union to continue attacking Venezuela.

“It would be sad if the EU continues to submit to Donald Trump’s interventionist, racist and warmongering opinions.

“Mr Shannon is wasting his time. In response to more efforts made by the US government to torpedo the dialogue and generate conditions of violence, the Venezuelan people will defend their independence and peace that we have consolidated thanks to our constituent democracy.”

“Although we have very important advances, we still have things that are pending, and another meeting has been called for Thursday 18 here in Santo Domingo,” the president said.

Venezuelan government representative Jorge Rodríguez said: “We have agreements in the vast majority of points and we have some points that must be resolved and I am sure that they will be resolved January 18.”

Opposition representative Julio Borges also confirmed the advance in many points, but said there are others in which “we have to untie the knots.”