Posted on September 15, 2018 by Anthony Brenner 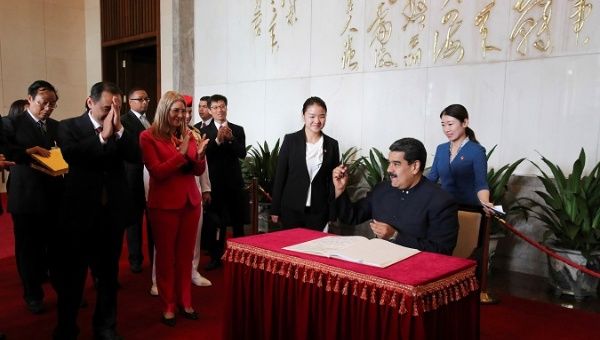 Venezuela-China relations have been built up since 1999. | Photo: Reuters

In the extractive sector, the countries signed an agreement to strengthen cooperation between China’s National Corporation for Gas Exploitation (CNODC) and Venezuelan Oil Company PDVSA to explore and extract gas, and another agreement with Chinese company Yakuang Group for gold exploration and extraction.

In the health sector, they signed a memorandum of understanding between Chinese tech company ZTE and Venezuela’s Health Ministry.

At a press conference, Venezuelan President Nicolas Maduro stressed the agreements “ratify the shared path of development for the investments to realize the development of our mixed oil companies.”

Economic relations between China and Venezuela have been strengthened since 1999 when Hugo Chavez first took office in the South American country. During Chavez’s first official visit to China, the two countries established a diversified energy commission and agreed on loans and construction contracts.

In 2001, the high-level diverse trade commission was created to promote cooperation agreements in several economic and social areas. Today, China has positioned itself as one of Venezuela’s most important commercial partners.

Maduro said the agreements are “perfectly aligned” with the country’s economic recovery plan, which has sought to stabilize the Venezuelan economy and combat the effects of the United States and European Union-led economic war and financial blockade.

“I have had to navigate the United States and Europe’s economic sanctions chasing Venezuela’s bank accounts, hijacking billions of dollar in international accounts and blocking commerce.” In that context, Maduro said he valued the relationship with China: “Thanks to the agreements of the commission and the solid China-Venezuela relations, our country has been able to face those circumstances and today I can say Venezuela is standing.”