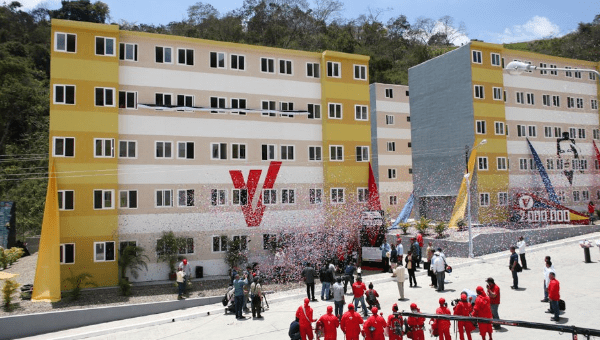 The government plans to build another million homes by 2019.

President Nicolas Maduro made the announcement in a Venezuela Housing Great Mission (GMVV) event in the new “Mirador de Caiza” housing complex in Charallave, state of Miranda, in which he also spoke of future housing plans.

The housing project is intended to deliver 500,000 homes during 2018, and the Venezuelan government plans to soon reach the historic number of five million houses for people with low resources.

“That’s almost two houses per day since the mission was born. There’s no country in the world that has built like Commander Hugo Chavez‘ government, and now President Nicolas Maduro’s, built,” said Jorge Rodriguez, the Communications and Information Minister.

The GMVV was created on April 30, 2011, by the revolutionary leader Hugo Chavez. It intends to bring into reality the ideas of the late commander of the Bolivarian Revolution, who looked after the needs of the Venezuelan people. Since he was sworn in as president, Maduro has kept the promise of Chavez projects.

Maduro promised to deliver another million homes by December 2019 and appointed 1,058 new land pieces to start building them.

The Venezuelan government wants to make the Housing Mission the most successful and ambitious housing policy in the history of the country. It’s based on five main action points: people, land, material, financing, and executors.