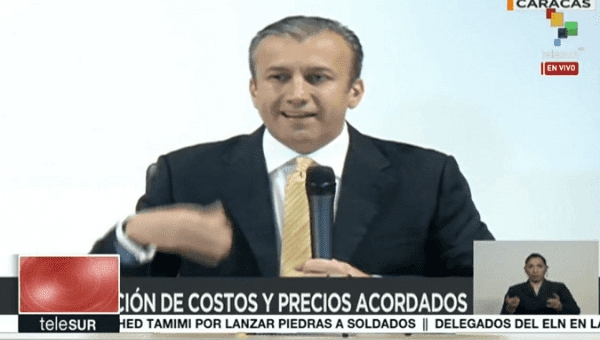 Senior economy official El Aissami also said the government has been able to reach a pact with certain business representatives in the country to set fixed prices for 25 basic goods.

August 22 (teleSUR) Tareck El Aissami, Venezuelan vice president of the economy, addressed the country’s business sector Tuesday and asked them to increase productivity to benefit the country and support the government’s economic recovery plan, while also explaining some of the details of the new reforms.

“We want companies to increase the productive capacity so that in these 90 days the market can absorb the measures… You have to produce more because the country will have a real purchasing power,” El Aissami said.

“This economic recovery plan will force us (the executive) to increase oil production and improve the productive capacity of our basic industries,” El Aissami said.

Simon Zerpa, Venezuela’s economy and finance minister, also announced the norms that will regulate the new currency exchange system. He says the exchange rate will fluctuate according to supply and demand, the central bank will publish the amount of currency traded in each auction, and there will be a limit of US$400,000 for business entities and US$500 for individuals.

Zerpa joined El Aissami’s call to the business sector to invest in the country and help in Venezuela’s economic development and confirmed several productive sectors had announced their support for the state.

El Aissami has also said the government has been able to reach a pact with certain business representatives in the country to set fixed prices for 25 basic goods, the details of which the government released Wednesday afternoon.

The minister scheduled the first auction for this Wednesday and the second one for Friday. He also said three new auctions will be held next week and for December they expect to have an auction per day.