Posted on December 4, 2018 by Anthony Brenner 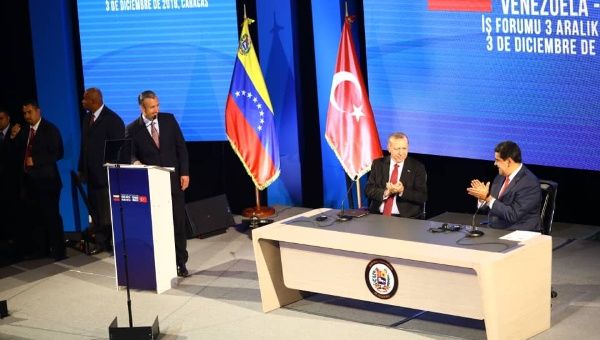 Dec 3 (teleSUR) President Nicolas Maduro of Venezuela and Recept Tayyip Erdogan of Turkey held a business forum between the two nations Monday, in which the parties formalized the intention of investments totaling some 4.5 billion euros (US$5.1 billion).

The impetus for talks, in part, stems from U.S. sanctions intended to financially isolate Venezuela by limiting its access to dollar currency, which these business deals aim to ameliorate. “‘We have laid the foundations for a very strong and dynamic relationship,” said the Venezuelan president to his Turkish counterpart.

Maduro said that it is necessary to create bonds “so that a powerful economy can flourish. ” The two nations have passed “from a nonexistent trade” relationship to one of billions of dollars.

“Venezuela at this time, with the application of the Economic Recovery Plan, is projected to be one of the countries of great international interest of and importance in areas such as oil, gas,” said the Venezuelan president.

For his part, Erdogan described the presidential visit he made as historic and said he was honored by the invitation from the South American country. In addition, he thanked the hospitality of the Venezuelan people. “We have a lot of potentials to strengthen” various areas of the economy, said the president of Turkey.