Posted on October 8, 2018 by Anthony Brenner 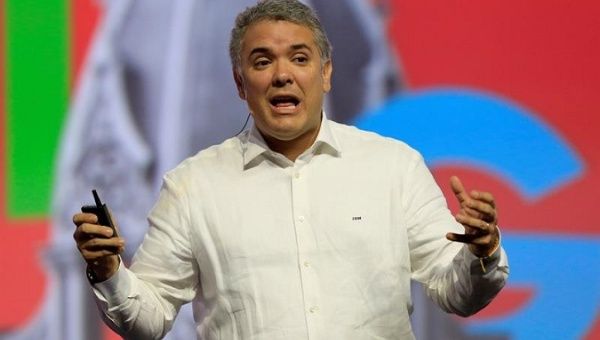 Since Duque’s inauguration, he “has placed the Colombian institutionality in the service of dark and unspeakable interests,” Venezuelan officials said. | Photo: EFE

Oct 7 (teleSUR) Venezuelan President Nicolas Maduro believes Colombia may be harboring some of the perpetrators of the August assassination attempt against his life, a statement said Sunday.

In a message to Colombian president, Ivan Duque, the Venezuelan Foreign Ministry denounced any and all attempts to overthrow Maduro’s legitimate administration.

Since Duque’s inauguration, he “has placed the Colombian institutionality in the service of dark and unspeakable interests against the government of Venezuela, supporting and supporting all the luck of actions and conspiracies,” the Venezuelan Foreign Ministry said, one of which was the recent attempt against his life on August 4.

Venezuela’s president survived an attack on his life during a military parade celebrating the 81st anniversary of the Bolivarian National Guard in the capital of Caracas on Aug. 4. “They have tried to assassinate me today, and everything points to the Venezuelan ultra-right and the Colombian ultra-right,” Maduro said the same day.

However, testimony gathered from one suspect, Henryberth Emmanuel Rivas Vivas (aka Morfeo), suggests that diplomats in Chile, Colombia, and Mexico could have been involved in the attack.

According to reports, former Venezuelan parliamentarian Julio Borges who is living in Colombia is suspected to have played a role in the assassination attempt. Duque has dismissed calls for his extradition, saying that it “would be absurd” to deliver the ex-minister for trial, despite the mounting evidence against him.

In closing, the Venezuelan ministry urged “the government of Colombia to exercise a diplomacy of height, frank, direct, without intermediaries to discuss bilateral issues of high strategic interest for peaceful coexistence.”

Maduro has requested the United Nations lead an independent investigation into the evidence and testimonies which have been gathered since the attack in August.