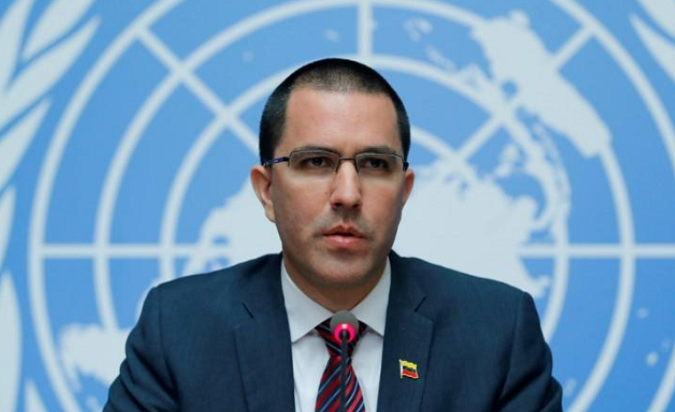 Over the past year and a half the Venezuelan foreign minister Jorge Arreaza (pictured here at UN press conference) and president Nicolas Maduro agreed to the Unicef contributions.

UNICEF will deliver over 130 tons of food and medical supplies to Venezuela along with training to the country suffering a U.S.-backed economic war.

Nov 27 (teleSUR) The Venezuelan government will take in some 130 million tons of food and medicine from the United Nations Children’s Fund (Unicef) in an effort to counter the U.S. economic blockade on the South American country.

Unicef and the Venezuelan government under President Nicolas Maduro came to a joint agreement that the U.N. agency will deliver 130 tons of supplies to the South American country to add to its existing medical service programs.

The U.N. agency said in a statement released on Monday that the program will benefit some 350,000 people, including women and children, who already receive medical and nutritional assistance.

The newly announced agreement will allow the Health Ministry to take in 30 tons of medical supplies to curb the spread of diseases and improve health in the communities with fewer resources. The agreement also includes technical cooperation and capacity building.

An international economic blockade on Venezuela spearheaded by the U.S. has reduced children’s access to essential services and threatens to reverse decades of progress in the country. The recent crisis has left 12 percent of the population undernourished and measles cases are on the rise, mainly among children.

The joint program will expand STD testing to 40,000 pregnant women while 100,000 children will have access to malaria treatment.

The Venezuelan government has traditionally chosen to not accept international supplies seeing it as an interventionist tactic from abroad. However, as the U.S. and the 14-member Lima Group that includes Peru and Canada have been conducting an economic war on Maduro’s administration over the past year and a half the president and the foreign minister Jorge Arreaza agreed to the Unicef contributions.