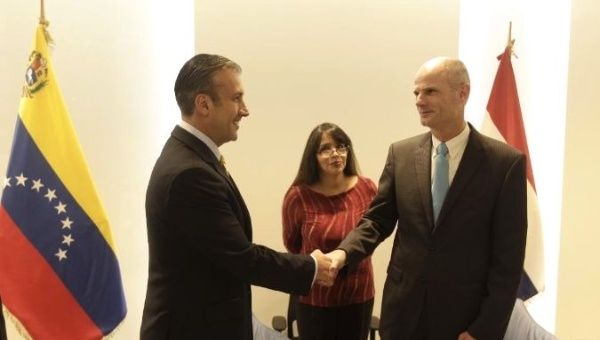 April 8 (teleSUR) The Venezuelan Government has resolved a dispute with Aruba, Bonaire and Curacao by restoring air and sea travel with the trio.

The ABC islands, as the group of countries is widely known, have signed a new agreement with the South American nation. The deal focuses on energy, economy and tourism industries.

Stef Blok, Minister of Foreign Affairs of the Netherlands and the Venezuelan Vice President (VP) Tareck El Aissami inked the agreement to repair the rift between the neighbors.

El Aissami said the Bolivarian Republic has communicated their point of view to their Dutch counterpart as well as how to strengthen relations with the Kingdom of the Netherlands, of which the trio of constituent states belongs. The vice president announced the reestablishment of ties with the Caribbean islands, during a press conference, explaining that the normalizing of the formerly strained maritime relations was a historic moment.

In early January, El Aissami previously stated that the South American country would uphold the suspension until high-level talks were held with the nations.

The VP detailed, at the time, that President Nicolas Maduro had extended the suspension of air and sea traffic as well as trade between Venezuela, and Aruba, Bonaire and Curacao.

Premier of Aruba, Evelyn Wever-Croes, responded to the breakdown of the relationship, saying that “there are close economic, cultural and family ties between the Caribbean islands and Venezuela.”

The ABC islands are supplied with fresh fruit and vegetables by Venezuela.

Maduro had accused the islands of operating black markets by taking Venezuelan gold, diamonds, copper and food products and selling them illegally.