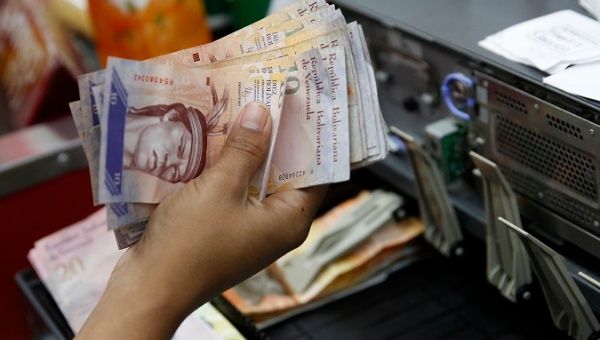 Venezuelan bolivars have been destabilized by illegal speculation activities, especially along the border with Colombia. | Photo: Reuters

“This means that we are facing a major criminal operation,” Vice-President Tareck El Aissami said of the seized bank accounts.

May 2 (teleSUR) Venezuela‘s Vice-President Tareck El Aissami has announced that 1,133 bank accounts have been blocked for irregularities revealed during investigations into illegal currency exchanging.

Operation Paper Hands has revealed that 90 percent of the accounts were held by the bank Banesco. According to Aissami, the fact that Banesco doesn’t carry out home checks on clients facilitates “criminal fixation of the dollar.”

The vice-president also said the bank has not reported to the Superintendent of Banking Sector Institutions (Sudeban) clients whose banking activity doesn’t correspond to their financial profile.

Illegal transfers were uncovered that extracted Venezuela’s currency out of the country, the majority operating from out of Cucuta, Colombia. Banesco has operated out of Colombia since 2013.

“This means that we are facing a major criminal operation that aims to leave Venezuelan families without money, extracting our monetary base to Colombia, and attempts to create a speculative market rate to destabilize and boycott the Venezuelan financial system.”

Companies were discovered to have declared large sums of money without justification.

The government is planning on opening exchange houses in special economic zones so that those who have legitimate exchange operations have a legal way of doing so, Aissami said.

“We are going to open exchange houses so that people who have some tye of exchange operation, especially family remittances, have a legal way to do so and don’t end up falling into the hands of organized crime mafias that push the illegal dollar, which hurts the national economy,” the vice-president said.

In April, the Bolivarian government announced that Operation Paper Hands had resulted in the detention of 86 people tied to cash contraband and exchange rate speculation.

The investigative operation is a move taken to combat the currency speculation that is affecting the stability of the Venezuelan bolivar.