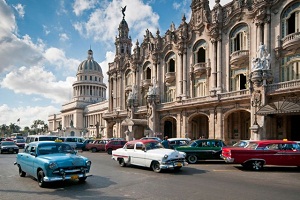 The meeting as of today and for three days of about 100 U.S. wine producers with their counterparts in this capital shows the interest of that American sector in closer dealings with the island.

This statement is part of a package of economic attractions this archipelago has, reinforced after the restoration of diplomatic relations between Washington and Havana, despite that trade restrictions for the blockade on Cuba remain.

This time, the First California Wine Symposium, to which 100 producers are participating in that country, is taking place at the Havana’s Conference Center from Feb. 1 to 3, organizers said.

The event is in charge of U.S. Cava Exports (USCE), based in Sonoma, California, which was founded in 2014 by Darius Anderson. USCE supports U.S. companies in the process of sales of agricultural and food products to this country.

Opportunely, Anderson said he was pleased to lead the delegation of wine producers, in a mission that has a lot to do with tourism.

The executive added that this is an ideal time, generating an unprecedented interest, especially among the growing community of private and family-run restaurants in people’s homes, known as “paladares,” and in the hotel sector providing service to a market of tourism.

The Symposium emerges as of the relationships and enthusiasm regarding the California wine generated in the visit of the first Cuban Sommeliers delegation to that territory in 2014.

Indeed, since 1995, Cuban sommeliers gained strength and some 100 people across Cuba have important studies and even international categories and awards, due to its mastery in this sector.

The California Wine Symposium includes a Grand Tasting at the Conference Center on Feb. 2, and seminars with information about wine regions and products ready for export. As part of this visit, the northern entrepreneurs will have the opportunity to contact with Cuban colleagues and exchange information on wine and tourism.