US ‘Warmonger’ Bolton to Advance Hardline on Venezuela, Cuba 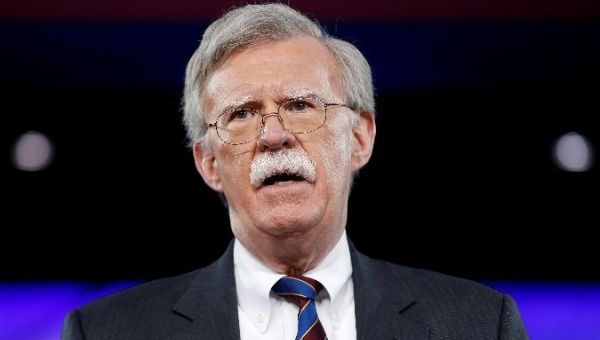 March 23 (teleSUR) Newly appointed U.S. National Security Advisor John Bolton is expected to take a hardline stance against Venezuelan President Nicolas Maduro and his administration, it has been revealed.

The former ambassador to the United Nations was described by a senior U.S. official as someone who “always emphasized how Cuba and Venezuela and Nicaragua have undermined U.S. interests throughout the region.”

“He’s a warmonger, and Latin Americans get nervous when American presidents tend to lean toward military versus diplomatic solutions,” a National Security Council official for former President Barack Obama told the Miami Herald. “It’s a militaristic style that won’t go down well in Latin America.”

During a 2013 hearing on Syria and Iran, Bolton claimed that Caracas was protecting Iranian smugglers: “These are expert smugglers… the largest Iranian diplomatic facility in the world is in Caracas, Venezuela…They are laundering their money through the Venezuelan banks.”

Bolton has also urged that stronger sanctions be imposed on Cuba. During his term as undersecretary of state, he named the island on his “axis of evil” list, claiming that Havana was attempting to develop biological weapons.

“If Mike Pompeo comes with the same policy that (former Secretary of State Rex) Tillerson initiated, with the same line of attack – of aggression – against sovereignty, against a population and its armed forces, he will again be faced with a wall,” Padrino said.