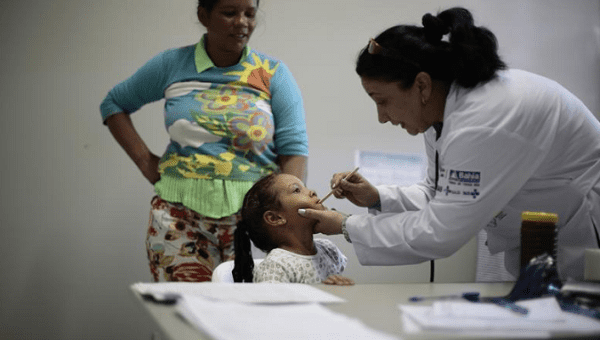 Cuban doctor Dania Rosa Alvero Pez examines a young patient at the Health Center in the city of Jiquitaia in the state of Bahia, north-eastern Brazil. | Photo: Reuters

Dec 5 (Telesur) Trump’s latest move of reinforcing the U.S.  blockade against Cuba is not only affecting trade and tourism between the two countries but is also hindering the collaboration on research and advancement in key scientific areas, Cuba’s Granma reported.

Cuba’s Institute of Tropical Medicine (IPK) won four grants from the U.S. National Institutes of Health to study arboviruses such as Zika, Chikungunya, and Dengue, which have been “put on hold.”

“The fullest knowledge about these viruses is to be found in Cuba, at the IPK, which has collaborated with the World and Pan American Health Organizations,” Reed added, calling Trump administration’s decision not only showed a “lack of common sense,” but also “a lack of concern for the health of U.S. citizens themselves.”

The United States’s “new hostile policy towards Cuba undermines confidence” in joint research, Luis Montero-Cabrera, a chemist at the University of Havana, told the Science Magazine.

“These policy changes that cumulatively seek to channel economic activities away from the Cuban military, intelligence, and security services, while maintaining opportunities for Americans to engage in authorized travel to Cuba,” a statement issued by the U.S. Treasury department in November, stated.

The number of scientists traveling to and from Cuba has significantly reduced, since the U.S. embassy in Havana which for now remains closed no longer issues visas, people have to travel to a third country to obtain visas.

The Trump administration “has likely shut the door to many U.S.-Cuban interactions,” John Van Horn, a neuroscientist at the University of Southern California (USC) in Los Angeles, said.

“Two researchers with the U.S. Centers for Disease Control and Prevention (CDC) told IPK they had to pull out because agency officials forbade them from traveling to Cuba,” the Science Magazine reported.

The U.S. State Department stated that only “short-term travel by U.S. government officials to Cuba is currently limited to those involved in the ongoing investigation” involving the alleged sonic attacks.