US Siding With Anti-Democratic Forces in Venezuela 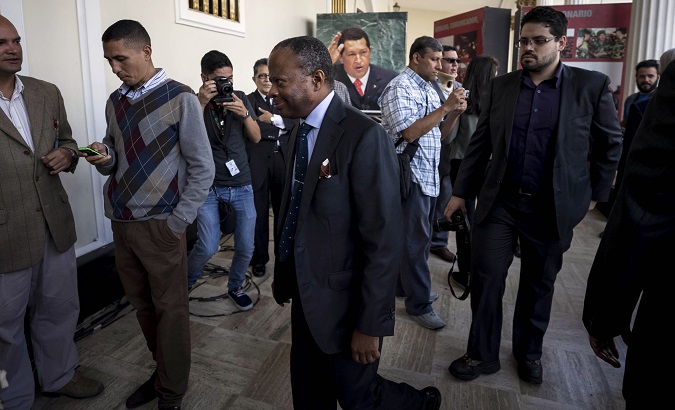 President Maduro has accused the U.S. of secret activities in the country, but the U.S. embassy is very open about some of them.

Dec 12 (teleSUR) A day after the landslide victory of the United Socialist Party of Venezuela (PSUV) in the municipal elections on Sunday, the Embassy of the United States in Caracas tweeted against their validity despite the wide participation of local political forces and opposition parties.

“The elections for municipal councils, in which the regime of #Maduro discredited the opposition parties, were deeply defective. We support those committed with democracy and we call for the regime to reestablish it in #Venezuela,” the embassy tweeted on Monday.

Venezuelan citizens and foreigners with more than 10 years residing in the country were able to elect 4,900 councilors and their deputy posts, for which 51 political organizations participated including 21 which are national political parties, 11 regional, five national Indigenous parties, and 14 regional Indigenous organizations. The most popular right-wing parties decided to abstain, but Democratic Action and First Justice did participate.

Election after election, the U.S. and other countries have supported the opposition parties’ decision to abstain from the process, leading to strong victories by the PSUV, President Nicolas Maduro’s party, and allies. Despite the failure of the strategy, the embassy argues the electoral system is rigged by the ruling party and has imposed personal sanctions on Tibisay Lucena, president of the National Electoral Council (CNE) “for actively impulsing the elections of the National Constituent Assembly, as well as collaborating in some way to undermine democracy or human rights in Venezuela,” as stated by a tweet on Dec. 6, 2018.

The U.S. government keeps sanctioning Venezuela public servants, like the foreign commerce minister Alejandro Fleming, who they blame for their “association with an important driving force of corruption in Venezuela, the black market surrounding the official regime on the exchange rate.”

But the attacks are not only limited to words and sanctions. On Wednesday, Maduro gave a press conference on the municipal elections and accused John Bolton, U.S. President Donald Trump’s national security advisor, of plotting to kill him.

According to Maduro, there is a plan encouraged by Bolton to train mercenary forces that will execute false positives to military forces at the border with Colombia in order to confuse public opinion and justify an attack on Venezuela. Citing information by Venezuela’s Bolivarian Service for National Intelligence (SEBIN), the joint effort is training 734 Colombian and Venezuelan mercenaries for a paramilitary group called G8.

In Dec. 7, 2018, the embassy commemorated “three months since Juan Requesens was illegally jailed,” saying there are “more political prisoners in civilian and military prisons in Venezuela than days in a year.”

Requesens, an opposition legislator, was accused by the SEBIN of participating in the failed assassination attempt against Maduro in August.

Maduro also denounced the behavior of the embassy, saying it “permanently makes declarations as if it was another institution in Venezuela,” meddling with the South American country’s internal affairs.

On Dec. 1, 2018, the embassy said the U.S. was “ready to offer emergency assistance in food and medicines to the Venezuelan people if only the government of Maduro would accept it.” Even though the embassy declared the sanctions allowed it, it didn’t talk about other sanctions that block the country financially, hampering efforts to export oil and introduce medicine and food into the country by its own means.

“Hamilton Mourao (the Vice-president elect of Brazil)… everyday declares what that government’s policy will be. Every day he says he will invade Venezuela, that Brazil will use his military forces,” he said.