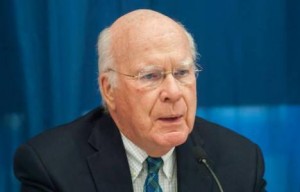 HAVANA – US Senator Patrick Leahy said on Tuesday that he will continue to work hard in Congress to lift restrictions imposed by the US government on Cuba.

In an interview with Prensa Latina, the Democrat from Vermont, who supports efforts to eliminate travel and trade bans on the island, and lift the embargo against the Cuban nation for 55 years, recalled that most Americans want relationships with Cuba.

“We know there will always be some problems, not everything will change overnight, but for the good of people in both countries we should have better links,” he said.

Leahy has traveled several times to Cuba, one of them last February when he led a delegation from the US Congress that met with Cuban President Raul Castro and other authorities, along with Republican Senator Thad Cochran.

The legislator, who is vice chair of the Senate Appropriations Committee and member of the Subcommittee on State and Foreign Operations, notes on his webpage that for two decades he has been pressing to transform a failed five-decade policy.

Following the announcement by US President Donald Trump on June 16 of the reversal of advances in ties with the Cuban nation, Leahy described the leader’s position as an empty setback on the road to normalization of ties.

According to the senator, Trump’s decision was a blow to the freedom of travel of the Americans, the American national interest, and the Cuban people, only with the aim of doing a political favour for a small and waning faction.

Then, in the Senate, he again criticized Trump’s position on this issue and advanced the need to vote for the Freedom of Travel to Cuba Act, introduced on May 25 by him and Republican Senator Jeff Flake along with others 53 co-sponsors from both parties.

“I hope the majority leader will let us have that vote,” Leahy said, adding that the Cuban people and the American people want closer relations, as recent surveys have shown.

Leahy, along with his Democratic colleague Amy Klobuchar, and Republican Senators Flake and Mike Enzi, also introduced in the Senate the Freedom to Export to Cuba Act that would eliminate the legal barriers imposed on Americans interested in negotiating with the Island.

Under these regulations, current restrictions on business with Cuba, including the original 1961 authorization to establish the commercial, economic and financial embargo, and subsequent laws requiring the application of that policy, would be repealed.