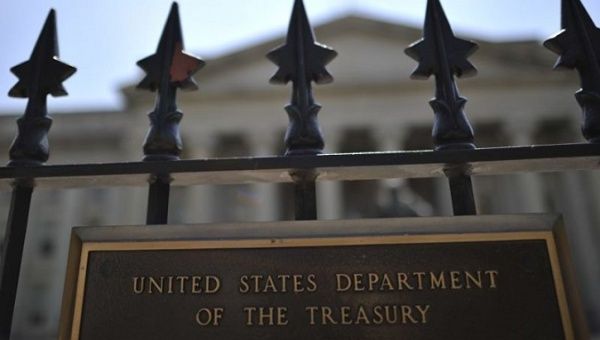 The U.S. Treasury has organized an assault via U.S. banks withholding notes of credit U.S. oil refineries need to be able to pay for Venezuela’s crude oil.

Nov 11 (Telesur) The U.S. Treasury Department has threatened holders of Venezuelan bonds that it would be problematic for them to deal with Venezuela’s executive Vice President Tareck El Aissami and the country’s Economy Minister Simon Zerpa, also head of finance for Venezuela’s State oil company PDVSA. El Aissami and Zerpa are Venezuela’s main financial negotiators and the U.S. government applied sanctions against the two fo them this year.

The development followed President Nicolas Maduro invitation to Venezuela’s creditors last week to meet in Caracas on Nov. 13 for talks on restructuring payment of US$60 billion of Venezuela’s bonds.

A financial terror campaign on steroids

Venezuela’s debt payments this year anticipate projections for payment of around US$8 billion in 2018 which will now be restructured.

Even though creditors are not forbidden under General License 3 of President Donald Trump’s Aug. 3 decree from participating in talks on Venezuela’s bonds, the U.S. Treasury has now said that any deal with El Aissami and Zerpa, both on the U.S. Treasury’s list of Specially Designated Persons, could be problematic, without referring directly to negotiations as such or to whether a possible agreement might break U.S. law. The U.S. Treasury went on to note that possible penalties for U.S. citizens could mean up to 30 years in prison or fines of up to US$5 million. In the case of financial institutions, the fines could go up to US$10 million.

In coordination with the U.S. Treasury pronouncements, Venezuela’s opposition media have supplemented the U.S. threats with “anonymous statements” supposedly implying that creditors are not planning to participate in the Nov. 13 meeting in Caracas allegedly on account of lack of comfortable facilities for the investors and fears about violence in Venezuela’s capital.

Along with news of this latest U.S. threat against Venezuela, international financial media also reported that on Nov. 8 a creditor of PDVSA’s 2017 bonds asked the International Swaps and Derivatives Association to determine whether the oil company had fallen into non-payment which would activate insurance payouts for credit non-compliance.

The Venezuelan authorities announced on Nov. 3 the start of the procedure to pay US$1.1 billion in capital and interest on the 2017 bond that expired on Nov. 2.

The ISDA stated that “the 2017 bonds issued by the reference entity (PDVSA) expired on Nov. 2, 2017, with a payment of the expired principal. Following the end of the grace period for claiming non-payment insurance, the principal has not been received.” Now ISDA members need to vote on whether or not to accept the creditor’s question about non-compliance and then discuss how to respond to it.

All of which amounts to rumors, misgivings, disinformation and yet more threats.

These maneuvers against Venezuela are based on a multifaceted attack. Although the attack’s internal allies have been arrested by the Attorney General’s office, imports and dividend payments in dollars have halved compared to 2016, because the U.S. Treasury has organized an assault via U.S. banks withholding notes of credit U.S. oil refineries need to be able to pay for Venezuela’s crude oil. That is on top of the fierce financial terror campaign by news agencies like Reuters and a long list of anti-Chavista information media.

In 2015, the United Nations approved an initiative of Argentina supported by the Group of 77+ China proposing nine principles for a nation to restructure its debt. Among the most important was the principle that if a debt renegotiation is approved by a “qualified majority” the renegotiation must be accepted by the remaining bondholders. This is why efforts are being made to sabotage the Nov. 13 meeting in Caracas. The first of those nine U.N. principles states that a restructuring of sovereign debt “should not be frustrated or obstructed by abusive means.”

The financial terror campaign aims to sabotage any debt restructuring based on the Collective Action Clause of Venezuelan bonds that would allow a majority of creditors to agree a legally binding restructuring for all bondholders making it obligatory for minority bondholders to accept. It is worth noting that this would render inapplicable President Trump’s August Executive Order forbidding a possible restructuring agreement. An analysis by two U.S. lawyers specializing in public debt, Lee C. Buchheit and Mitu Gulati, explains that PDVSA could propose a swap of independent promissory notes, include them in any restructuring and turn those bondholders into preferred creditors.

According to the lawyers, PDVSA should get widespread acceptance from so-called holdout bondholders and so-called vulture funds for a successful negotiation because this swap mechanism would put “creditors in a dilemma: either they accept the swap and take a future restructuring … or they hold on to current PDVSA bonds.”

Almost all Venezuela’s current sovereign debt has Collective Action Clauses with an average qualified majority of 80%. This mechanism could work in favor of a possible restructuring of PDVSA’s debt with a large number of bondholders, thus reducing the U.S. Treasury’s ability to declare any agreement illegal based on Trump’s Executive Order of last Aug. 25.

Now Russia and Venezuela have agreed to restructure Venezuela’s debt, it is more urgent for the United States government to force the possibility of a default so as to affect Venezuela’s financial credibility and prevent Venezuela’s debt payments. The financial terror campaign seeks to bring about non-payment so as to deepen its projection of Venezuela as an unstable country with doubtful ability to make payments on time. Self-evidently, the support of China and Russia for Venezuela’s debt restructuring represents a geopolitical counterweight with major influence in financial markets which the U.S. needs to roll back.